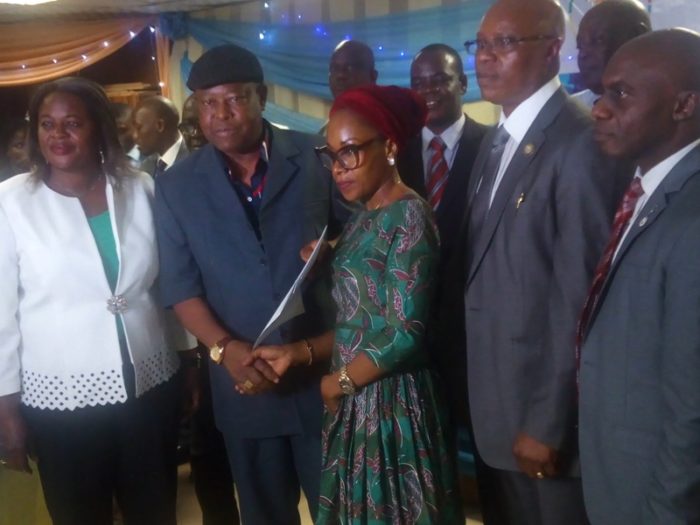 Chairman, Local Government Service Commission, Babatunde Rotinwa, presenting insurance package to a relation of one of the deceased. With him are the Permanent Secretary, Fola Padonu and other top government functionaries.

The Lagos State Government on Wednesday presented N280 million to the families of 110 deceased staff of Local Governments and the State Universal Basic Education Board, SUBEB.

He said the 110 deceased staff comprised 53 from Local Governments and 57 from SUBEB.

Muslim, who was represented by the Permanent Secretary in the Ministry, Fola Padonu said last year, LASACO Assurance PLC paid insurance benefits to 145 beneficiaries of the deceased staff from SUBEB and Local Government councils.

Deputy Managing Director, LASACO Assurance PLC, Rasak Abiodun said the state government had been so committed in paying premiums as at when due, urging other states to emulate the example of Lagos.

According to him, in the last three years, the company had paid insurance package to the families of deceased staff to the tune of N1.5 billion.

He disclosed that N280 million would be paid to the 110 families of deceased staff in the first phase, saying that the second phase would take place in November and that the company would likely pay up to N300 million to beneficiaries.

Chairman, Local Government Service Commission, Babatunde Rotinwa appealed to families of the deceased to expend the money collected judiciously, especially in training the children of the deceased in school so that their labour would not have been in vain.

A daughter of one of the deceased, Salami Adeola commended Ambode for the gesture, saying that the money paid to the family had given them hope.

Husband of a deceased teacher, Sunday Chukwumezie said his wife died in 2017, having put 20 years in the service of Lagos State Government, but commended the government for the money.