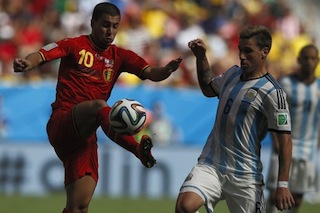 Captain Eden Hazard has said while England’s “Golden Generation” failed to live up to their potential, Belgium have a real chance at lifting trophies,

Hazard will lead a powerful Belgium side at the World Cup boasting players from some of Europe’s top sides, including Thibaut Courtois, Kevin De Bruyne and Romelu Lukaku.

In the 2000s, big things were expected from an England squad that included the likes of David Beckham, Steven Gerrard and Michael Owen.

However, they never progressed past the quarter-finals at a major tournament.

“The golden generation you had in England, 10 years or 15 years ago, won nothing.

”Now I think the fans, journalists, all of Belgium, the country, just want to win something. We have a golden generation,” Hazard told reporters.

Belgium will face England in the final Group G match at the World Cup on June 28.

They open their campaign against Panama on June 18 before meeting Tunisia.