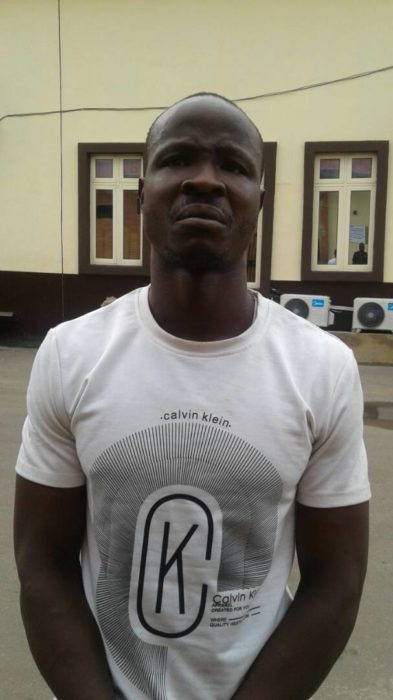 The operatives of the Lagos State Task Force at the weekend arrested a 35-year-old Togolese man,identified as Omoakin Kojo in Ikeja for pretending to be an officer of the Lagos Environmental Sanitation Corps (LAGESC) with fake identity card in a bid to extort money from the public.

Chairman of the Lagos State Task Force, SP Olayinka Egbeyemi disclosed that the suspect was arrested by the enforcement team of the Agency after an official complaint about illegal activities of the suspect was lodged by the Lagos Environmental Sanitation Corps (LAGESC).

Egbeyemi disclosed further that the suspect, popularly called ‘FRYO’ was nabbed around Ikeja railway line for perpetrating all sorts of illicit act ranging from impersonation, defamation of character and extortion in the name of LAGESC.

He noted that the suspect and his cohorts who were at large paraded themselves as officers of LAGESC with fake identity cards in disguised and defrauded their victims and by extension defamed the Agency.

The Chairman hinted that preliminary investigation revealed that the suspect and his cohorts had been long in the illegal business across the State arresting pedestrians who crossed the express roads.

Egbeyemi commended Governor Akinwunmi Ambode for the on-going developmental projects across the State, particularly the construction of additional pedestrian bridges and lay-bys for commuters along major highways to keep free flow of traffic.

The Chairman, who warned members of the public to be wary of touts going around impersonating enforcement officer of the State, however, confirmed that the Lagos State Commissioner of Police, Edgal Imohimi had directed that the suspect be charge to court.

The Commissioner of Police further charged Egbeyemi to ensure that other perpetrators at large were arrested and brought to book to serve as deterrent to other touts.

The suspect, Kojo confessed to have been arresting people illegally and extorting money from them with his fake identity card in the last six years.

He confessed further that they were four as a group and that their routine operations cut across Ikeja, Berger, Oshodi, Ojota, Ojodu and Mile 2.

Kojo said he made an average of N8,000 to N10,000 per day from arrested pedestrians who would preferred not to be prosecuted in court.

The suspect who claimed to still be using his old Kick Against Indiscipline (KAI) identity card to defruad his victims however appealed to the government to tamper justice with mercy and that he was ready to be of good character and go back to his country if pardoned.