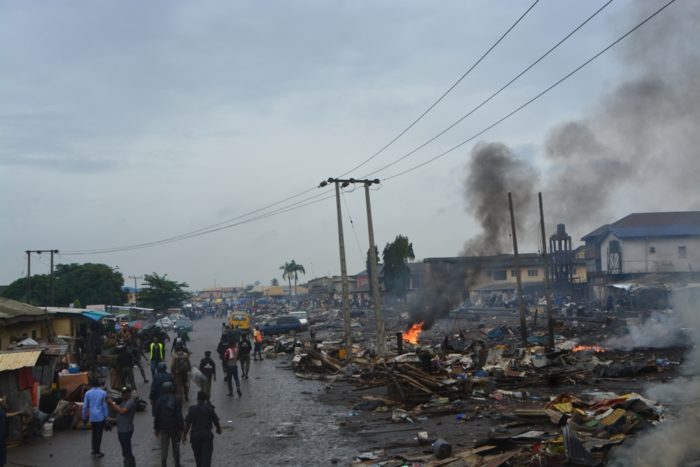 Over 500 shanties and illegal structures within and outside the Oko-Oba abattoir and Lairage Complex in Agege area of Lagos State were on Saturday demolished by the State Government as part of effort to ensure adequate upgrading and transformation of the complex for improved operations.

The State’s Commissioner for Agriculture, Mr. Oluwatoyin Suarau who disclosed this while reviewing report of the demolition exercise carried out by officials of the State Ministry of Agriculture in collaboration with the Ministry of Environment, Lagos State Environment and Special Offences Enforcement Unit, Department of State Security and Operation MESA, noted that the clean-up exercise included all shanties and illegal structures inside the abattoir and along Fagba-Railway section of the abattoir complex.

According to him, the State Government’s motive for carrying out the clean-up exercise is in a bid to improve the hygienic condition of the complex and ensure best practices in the red meat value chain and not to witch-hunt anyone.

“I want us all to see this exercise as a positive development in the red meat value chain and not as Government’s instrument to disrupt activities at the complex. Rehabilitation of the facilities at the Oko-oba abattoir is to ensure that operations at the complex meets international standard”, Suarau said.

The Commissioner stated that the administration of Governor Akinwunmi Ambode has put in place and implementing planned policies and programmes aimed at changing the face of abattoirs and slaughter slabs across the State.

He explained that completion of projects at the Oko-Oba abattoir complex will result in an upgraded abattoir equipped with a standard clinic to take care of people and other emergencies in the complex.

“We have completed the fencing of the abattoir and the heap of refuse which has existed for several years has been cleared”, the Commissioner added

Suarau, while speaking on the significance of the upgrade of the complex, said that the State Government is poised to monitor and ensure a safe red meat market that will conform to the smart city status.

Reiterating Government’s commitment to ensuring that Lagos remains a food secured place, Suarau assured that the present administration is ever ready to overcome all challenges threatening wholesome production and consumption of meat in Lagos.

While urging stakeholders at the complex to support the drive of government to attaining a befitting status of a smart city abattoir, he warned anyone who does not have legitimate business within the complex to vacate stressing that the State government will not tolerate harboring of miscreants in and around the complex.

He added that a task force team has been stationed at the complex to ensure continued monitoring of activities at the complex and ensure effectiveness of the clean-up exercise.

“Operations in the abattoir after this clean up exercise will no longer be business as usual. We are committed to implementing in phases planned projects that will transform the abattoir around for good”, he said.