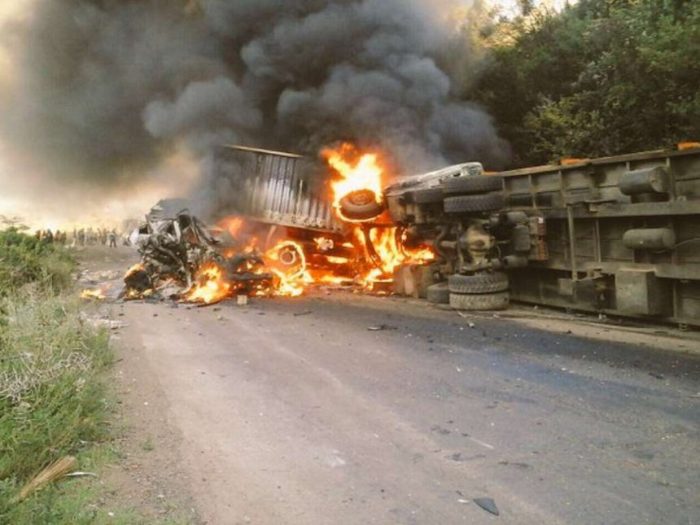 Magistrate Banji Ayeomoni of Okitipupa Magistrates’ Court in Ondo State, together with his son Dara, another relation and his driver were reported dead in an inferno caused by a petrol tanker spillage in Ekpoma.

An official of the court, who spoke on condition of anonymity told the News Agency of Nigeria (NAN), on Saturday, that the incident happened on Friday night close to Ambrose Ali University (AAU), Ekpoma.

The official said that the late Ayeomoni went to visit his children at Ekpoma, adding that while returning his vehicle ran into the petrol spillage of a tanker which caused fire and other vehicles behind were also affected.

The source added that the Magistrate’s son, Dara, who is a 500-level student of medicine of AAU, a young boy of the deceased wife’s sister and the driver died at an undisclosed hospital shortly after the accident.

“We heard that the late Magistrate went to visit his children at AAU when the incident occurred through a petrol tanker oil spillage, which claimed their lives.

”It was indeed very sad news to all members of staff and lawyers in our court,’’ the source said.

Meanwhile, Insp. Zedekiah Orogbemi, the court’s prosecutor who also confirmed the incident said that he was shocked when he got the news.

Orogbemi, who described the late Magistrate as a “thorough bred lawyer and a good man’’ prayed for the repose of his soul.

“I was shocked when the news broke and up till now, I still cannot believe that Ayeomoni is gone but what can we do than to pray for the repose of his soul.

“I also condole with his family and pray that God should give them the fortitude to bear the irreparable loss,’’ he said.

The 59-year-old Magistrate, who was due for retirement next year, left behind his wife and two other children.