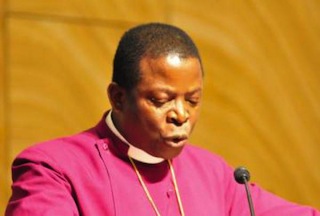 Metropolitan and Primate of All Nigeria, Anglican Church, Most Reverend Nicholas D. Okoh

The Church of Nigeria, Anglican Communion has called on political leaders to promote peace in the country as preparations for the 2019 general elections intensify.

Most Rev. Nicholas Okoh, Archbishop, Metropolitan and Primate of the Church, made the call on Wednesday while inaugurating a five-day meeting of the Standing Committee of the Church in Minna.

According to Okoh, as the elections draw closer, it is pertinent for politicians to remember that it is God who gives and takes power.

“As we see 2019 drawing closer, we wish to call on our political leaders and all politicians seeking elective positions to remember that power comes from God.

“In whatever we do, the peace of the nation must be preserved because in a war situation everybody will be affected,’’ he said.

Okoh reminded politicians that Nigerians yearn for the dividends of democracy promised by politicians before they were elected.

The primate advised that new promises should be weighed against the background of available resources to ensure delivery.

He enjoined the Independent National Electoral Commission (INEC) to be an unbiased umpire in the 2019 general elections, saying the outcome would determine the country’s destiny.

“The standing committee wishes to urge INEC to remain an unbiased umpire in this race to determine Nigeria’s destiny. Whatever will disenfranchise any Nigerian should be avoided.’’

He called on all eligible citizens to get their Permanent Voter Cards (PVCs) and vote in the general elections, adding that “your vote is your power and your vote will count’’.

He further appealed to security agencies to conduct the affairs of the 2019 general elections with the future of the country in mind.

The clergy urged the government to expedite action on the workers minimum wage and do the needful in order to reduce the poverty level in the country.