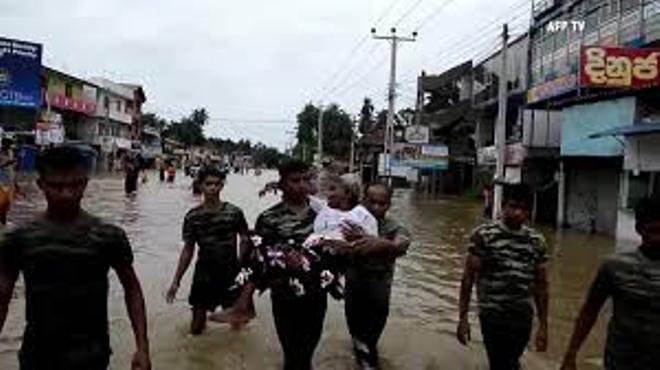 An elderly, being helped out of a flooded home in Sri Lanka

Sri Lanka’s Disaster Management Center (DMC) on Thursday said 12 people had been killed and over 69,000 affected from the heavy winds and rains which lashed out across the island recently.

DMC Spokesperson Pradeep Kodippili said that while rains had now reduced, people who had been relocated to safe shelters were urged not to return home due to the threat of landslides.

He said people living in low lying areas were also advised to be cautious as rivers had reached spill levels and could overflow if rains continued.

Kodippili said a red landslide warning remained in place in the Kalutara District in the south, while people in the risk prone areas had been evacuated to safe shelters.

An emergency line had been set up by the DMC for those who needed help or were stranded due to the floods.

Hundreds of officials from the forces and the police had been deployed in the flooded areas and were continuing in rescue operations and distributing first aid and dry rations to those affected.

President Maithripala Sirisena has also ordered for the continuous supply of dry rations, drinking water, and health facilities to be distributed to those who were in safe shelters and those affected by the floods.

The Meteorology Department in its latest weather update said the severe Cyclonic Storm “TITLI’’ in the Bay of Bengal, which had brought heavy rains, was now located 1,200 km away from Trincomalee in the east.

The department noted that storm is likely to intensify further and move North-Westwards later.

However, it warned that heavy falls of about 75 mm could be expected in some districts in Sri Lanka.