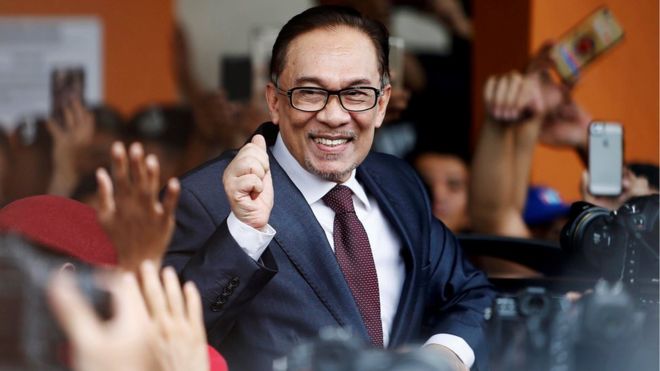 Malaysia’s Prime Minister-in-waiting Anwar Ibrahim, on Monday took an oath as a Lawmaker in a Swearing-in Ceremony in Parliament.

Anwar won a by-election for a seat in parliament on Saturday.

He now joins his wife Wan Azizah Wan Ismail, who is Malaysia’s deputy prime minister, as a member of parliament.

Prime Minister Mahathir Mohammad and Anwar became unlikely political allies earlier this year when they joined forces to unseat former premier Najib Razak, who has been implicated in the multibillion-dollar 1MDB corruption scandal.

In the 1990s, Anwar served as deputy prime minister under Mahathir.

When Anwar made a push to increase his power, Mahathir had him jailed on what many deemed politically motivated sodomy charges.

As part of their arrangement, the 93-year-old Mahathir has pledged to step down in a year or two and to help create a path for Anwar to become premier.

After taking the oath, Anwar told reporters in a televised news conference he felt “vindicated’’.

Anwar said his priority was to assist the government and focus on parliamentary reforms.