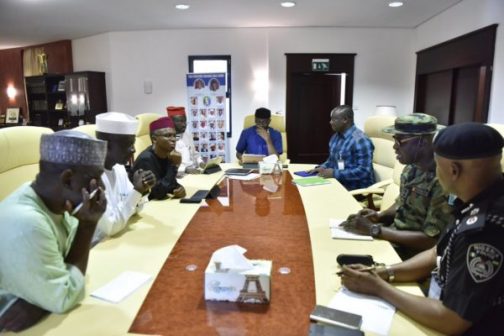 Governor El-Rufai, second left meeting with heads of security agencies on Monday: He says the curfew will be reviewed on Tuesday

The 24-hour curfew slammed on Kaduna metropolis will be reviewed on Tuesday, in view of the return of normalcy, Governor Nasir El-Rufai said in a special broadcast today.

The governor said that the State Security Council would meet on Tuesday morning to review the security situation and possibly reduce the hours of the curfew.

In the broadcast, El-Rufai lauded the massive support of communities in ending the violent clashes that engulfed Kaduna, the state capital on Sunday.

He said the government remains committed to ensuring lasting peace across the state.

“The support of communities has been reassuring,” he said, adding that they must also “reject those who incite violence and divide us.”

The governor cautioned residents against spreading rumour and fake news which contributed largely to the violence.

The governor said security agents have been directed to escort travellers passing through Kaduna to the outskirts of the town so as not to impede their journey.

El-Rufai assured that the government would vigorously pursue the prosecution of all those apprehended in the course of the recent violence across the state, including the 65 being prosecuted over an earlier violence in Kasuwan Magani in February.

El-Rufa’i who commended security agents for their professionalism in containing the violence, however stressed that the ultimate guarantee to peace lies in the willingness of all to live in peace and resolve misunderstandings amicably.