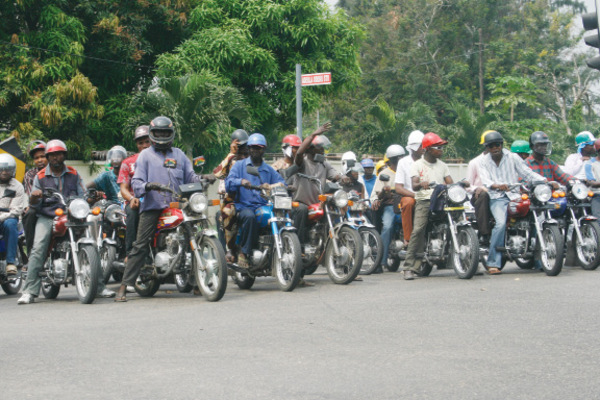 Commercial motorcyclists popularly known as `okada` operating in Karu area of Federal Capital Territory (FCT), have decried the incessant attacks on them by unknown persons.

On Tuesday in Abuja, they said that their members had been attacked many times within the last few months, with their motorcycles and other valuables taken away sometimes.

One of them, Mr Rilwan Adamu, said that the attacks had become a daily affair, adding that in some instances, the attackers drugged their victims before carrying out the heinous act.

He said that their association had reported some of the cases to the police but without any result and that the incidents had been unabated.

Adamu said that some of his colleagues had relocated to other parts of the territory and Mararaba in Nasarawa state to avoid the ordeal.

Another motorcyclist, Mr Salisu Mohammed, who was attacked two times, said that his motorcycle and valuables were taken away by the thieves after they sprinkled some powdery substance into his eyes.

“I was unconscious and left on the ground before some good Samaritans took me to my house in Mararaba with the help of my membership identification card,’’ he said.

Mohammed said that it was from the business that he catered for his family and appealed to the police in the area to do more to check activities of the criminals.

“We will be happy if the security agencies in Karu will provide an enabling environment for us to operate,’’ he said.

Their other colleague, Mr Danboyi Daniel, said that operating motorcycle around Karu had become scary as “one does not know when the unexpected will happen’’.

Narrating his ordeal, he told NAN that he was once attacked at about 7 p.m. but was lucky to have escaped with the help of some passers-by.

Daniel said that after the attack, he stopped operating in that area beyond 7 p.m. and had stopped picking two passengers at a time to avoid being attacked.

Contacted, Spokesman of the Police in the FCT, DSP Anjuguri Manzah, told NAN that the command had arrested some suspects in connection with the crime and that they were being prosecuted.

He added that personnel of the command attached to the Karu area would continue to raid all black spots to ensure that crimes and criminality were reduced to the barest minimum.

“The command will continue to sustain the raids on black spots in Karu area to rid it of criminals,“ he said.