Suffocation may be cause of Zainab Nielsen's death - Pathologist 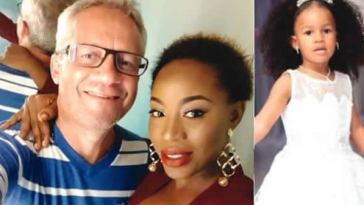 A Lagos High Court sitting at Igbosere has been told how Nigerian singer, Zainab Nielsen, alias Alizee, and her three-and-a-half-year-old daughter, Petra, died of head injuries and asphyxia (or suffocation) that were not self-inflicted.

A Consultant Pathologist, Professor John Obafunwa, told the Presiding Judge, Justice Bola Okikiolu-Ighile that his post-mortem examination of Zainab’s corpse suggested that she was killed when her nose and mouth were forcibly closed which deprived her of oxygen to breath

She also suffered bruises around her head which were consistent with “blunt force trauma that were not enough to cause any fracture.”

Obafunwa said evidence showed that the deceased struggled to free herself from her killer’s grip using her hands and nails.

The result of a DNA analysis of Zainab’s nail clipping, the witness added, revealed the presence of her DNA material and that of “an individual described as Peter”.

Obafunwa testified in the twin murder trial of Zainab’s husband, Peter Nielsen, who is alleged to have killed Zainab, 29, and Petra on April 5 at the couple’s Banana Island, Lagos home.

Nielsen, 53, was arraigned on June 13 on a two-count charge of murder contrary to Section 223 of the Criminal Law of Lagos State, 2015.

Attorney-General of Lagos State and Commissioner for Justice, Kazeem Adeniji, told the judge that Nielsen murdered both Zainab and Petra at about 3:45am at No. 4, Flat 17, Bella Vista Tower, Banana Island Ikoyi.

Shitta-Bey tendered two compact discs containing pictures of Obafunwa’s autopsy and they were admitted by the court as exhibit.

The court also permitted the prosecution to play a video clips of the pictures to explain Obafunwa’s testimony.

Obafunwa said he performed the autopsy on Zainab and Petra on April 8, two days after they were found dead.

There were also marks underneath her scalp, surface of the skull bone.

Obafunwa said: “It was all over, not just on one location.”

Obafunwa explained that toxicology reports ruled out poison as the cause of her death.

“Toxicology results showed that nothing – no chemical, alcohol, whatever – was found in her system.

“Nail scrapings, according to the Lagos State DNA Lab, revealed the presence of DNA material composing a mixture of Zainab and another male individual described as Peter. It went on to say Peter cannot be completely exonerated.”

When Shitta-Bey asked the witness for the likely cause of the Zainab’s death, based on his autopsy, Obafunwa said:

“I concluded that the death in the case of Zainab resulted from a closed cranio-cerebral injury with asphyxia. Closed refers to the fact there was no skull fracture. The conclusion of asphyxia was what I highlighted: brain swelling, engorgement of the lungs, numerous pin-point haemorrhage….the fluidity of blood – absence of clot – is consistent with asphyxia, which is a state of reduced or absolute absence of oxygen to the blood. The question is, why inadequate oxygen in the blood?”

The witness explained that the evidence was indicative of forcible closure of the nose and lips. The victim would have been struggling. The evidence in support of this would be the nail marks trying to remove or disengage the blockage. It was no surprise to me the result of the DNA that I got on the nail clippings.”

He ruled out “a single fall to the ground” as the cause of Zainab’s head injury.

“Blunt force trauma was around the head, all over, not just a fall to one side,” Obafunwa added.

The pathologists’ conclusion for the cause of Petra’s death was similar. He however noted that the evidence for blunt force trauma was much more severe in the child than in her mother.

Justice Okikiolu-Ighile has adjourned till tomorrow for continuation of trial.