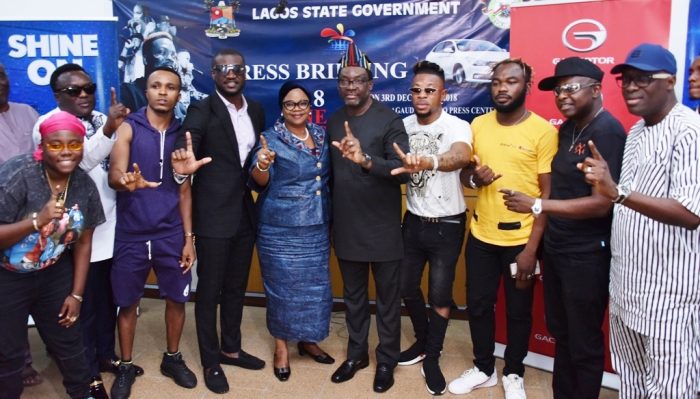 No fewer than two million direct participants and 90 million viewers worldwide are expected to take part in this year’s edition of the flagship Yuletide end-of-the-year revue of the Lagos State Government, One Lagos Fiesta (OLF) holding from the eve of December 24, 2018 till the wee hours of January 1, 2019.

The State’s Commissioner for Tourism, Arts and Culture, Steve Ayorinde who said this while addressing a press conference on Monday at the Bagauda Kaltho Press Centre in Alausa, Ikeja, Lagos, Southwest Nigeria to formally announce activities for this year’s show, said necessary arrangements had been firmed up to ensure another hugely successful outing.

Ayorinde, who briefed the media alongside senior officials of the State Government, some a-list artists billed to perform and representatives of sponsors, said the OLF would hold in five locations simultaneously across the State in line with the tradition adopted in the last four years, adding that it was gratifying that the event had become the biggest end-of-the-year entertainment brand in Africa as it provides an unparallel platform for residents and visitors, both old and young, to relax and enjoy themselves in a secured environment.

“As a Government, we are encouraged by the noticeable achievements recorded as a result of hosting this event and we are taking advantage of this year’s edition to fete millions of Lagosians who have supported this initiative running for the 4th consecutive year.

“The One Lagos Fiesta draws parallel with other international cross over events in the world especially in the countdown night of December 31, and with the unique features associated with the fiesta, it is anticipated to attract over 2 million direct participants across the State and over 90 million viewers via live television and live streaming on social media,” Ayorinde said.

He said considering the strategic position of Lagos as the economic and socio-cultural hub of Africa with vibrant expression of art, it had always been the tradition of Governor Akinwunmi Ambode’s administration to use such instrument as springboard to drive development and market the State’s potentials to domestic and foreign investors who would, in turn, contribute meaningfully towards making Lagos Africa’s model mega-city.

Tagged ‘A December to Remember,’ the Commissioner said there would be live music concert, which will feature trending DJs and MCs and performances by popular Nigerian artistes and musicians running from 6.00p.m till 12 midnight across the five venues in Agege (Agege Stadium), Victoria Island (Bar Beach/Eko Atlantic City), Badagry (Badagry Grammar School), Epe (Epe Marina Waterfront) and Ikorodu (in Ikorodu Town Hall).

Other festivities, according to him, are kiddies corner, which would run from 12.00p.m to 6.00p.m with various activities like bouncing Castle, Rodeo Bull, Carrousels, among others, as well as cultural performances, stage plays and talent hunt, otherwise known as Lagos Grows Talent, a grassroots’ competition which provides a platform for youths to compete using their talents in the areas of music, dance, comedy and other creative activities.

Ayorinde also announced the introduction of a raffle draw as part of this year’s fiesta for the purpose of winning a brand new saloon car, courtesy of one of the partners, CIG Motors.

Giving details, he said: “The competition is open to only residents of Lagos State who are up to 18 years of age and are in possession of a valid Permanent Voter’s Card (PVC). Every individual that resides in Lagos and wishes to participate is a potential winner of the vehicle.

“Entries will open on Thursday, 6th December and close on Wednesday, 26thDecember 2018, and entries will be submitted strictly online through the OLF website, while the winner is expected to emerge through a raffle draw which will be conducted on the 31st December, 2018 at Eko Atlantic City venue. There are other consolation prizes to be won.”

While thanking all the sponsors for supporting the vision of the present administration to scale up the entertainment and tourism potentials of the State via the OLF platform, Ayorinde also encouraged Lagosians and visitors to take advantage of the fiesta to experience and savour the attractions it brings whilst enjoying the fun that is available in all the venues, just as he assured that adequate measures have been put in place for security, traffic management, sanitation and health concerns to ensure safety of lives and property throughout the course of the fiesta.

Some of the a-list artistes expected to perform at this year’s OLF include Olamide, Teni, Slimcase, Mr Real, Humblesmith, Blackky, Mr P, Dr. Adewale Ayuba, Saheed Osupa, among many others.