2019: Why Mbaka demanded money from Peter Obi, others 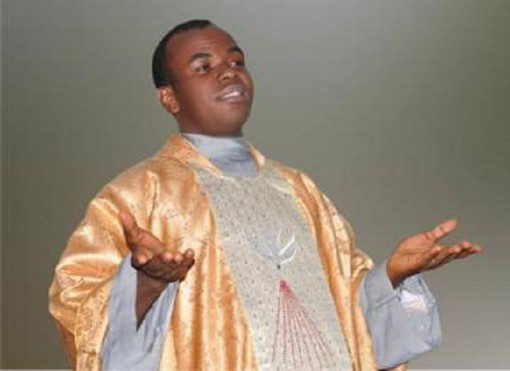 Rev. Fr. Ejike Mbaka, the Spiritual Director of the Adoration Ministry, Enugu, has revealed why he demanded money publicly from former Governor of Anambra State and Atiku’s running mate, Peter Obi and other politicians during the annual harvest and bazaar celebration last weekend.

The Priest while replying his critics said. “God deserves money.”

He stated that he demanded the money from Obi publicly because he wanted the process of donation to be open and transparent.

The fiery preacher also vowed to return all the funds to the donators, asking them to send their account numbers.

Mbaka at his Adoration Ground on Friday said this in responce to criticisms over the video that went viral wherein he was seen trying to compel Obi to disclose how much he would donate to his church project.

Speaking, Mbaka said, “We do it outside, publicly because if I am silent, rumours will begin to spread that someone gave me $10m and why did Mbaka keep quiet?

“They will abuse me even if I am silent because anytime they want to attack this ministry, they will start somewhere.

“If I am silent they will attack, if I talk, they will attack it. And don’t forget that the liturgy was not tampered with. I finished the mass and even removed my priestly attire. No one can fault me on that.

“Everyone who came was blessed but they turned it against me, saying I am after money. God deserves money. If you don’t want to bring your own in your stinginess, hold it. I will give God all that I have and even if anybody wants to join them, you’re free to join them.

“Where God the Father, Son, and Holy Ghost are, there Fr. Mbaka will be. I will build this place for the church. Whoever felt insulted, I apologise. But I didn’t come to your house. It was you who came for the bazaar.

“As for me, I am in high spirits. I want to assure you, those who are thinking that it is their money we will use to build this ministry, before the end of tomorrow, I will send all their monies into their accounts.”