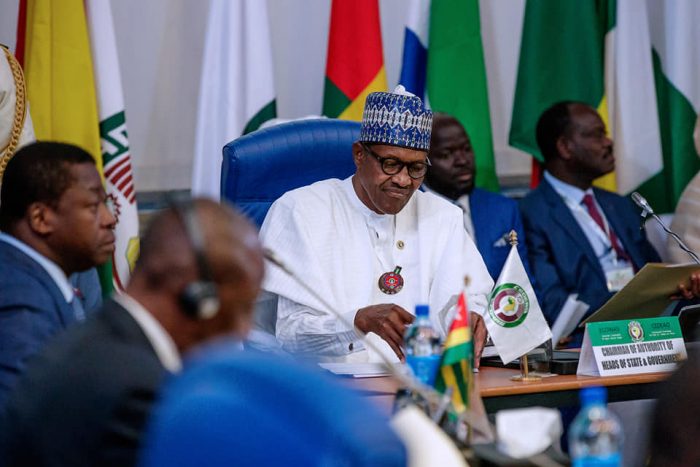 Buhari at the ECOWAS meeting

Nigeria’s President, Muhammadu Buhari on Saturday lamented that despite successes recorded by the Economic Community of West African State, ECOWAS, the body is still faced difficulties in the economic, governance, peace, security and humanitarian fields.

Buhari, who is the current Chairman of ECOWAS spoke while declaring open the 54th Ordinary Session of the Authority of Heads of State and Government of the ECOWAS in Abuja, Nigeria.

According to him, the regional organisation was still confronted by several challenges that must be tackled, observing that the lofty ideals of ECOWAS, including the promotion of cooperation and integration, leading to the establishment of an Economic and Monetary Union in West Africa as well as the creation of a borderless peaceful, prosperous and cohesive region, would be unattainable without peace and security.

He said this was why he decided to make the issue of peace and security the major focus of his chairmanship.

Buhari noted that his efforts had started yielding dividends as the organisation had been able to douse tension and restore confidence in some potentially disruptive situations, particularly in Guinea Bissau, Togo and Mali.
On the forthcoming national elections in Nigeria and Senegal in 2019, the Nigerian leader said he had already pledged to conduct free, fair and credible elections.

“In the same vein, the Independent National Electoral Commission (INEC), security agencies and other political stakeholders, have expressed their unwavering commitment to the conduct of peaceful elections devoid of violence, rancour and acrimony, in the higher interest of the nation,’’ he added.

But he noted with concern that terrorism and violent extremism had continued to threaten peace and security in the sub-region.

The president said: “This threat calls for collective action on our part, if we are to effectively and definitively eliminate it.
“As we work on new strategies to combat and eradicate this menace, we require the support of our partners to ensure the achievement of our objectives.’’

Buhari, however, commended leaders of ECOWAS for their efforts in promoting peace, stability and development in the sub-region.

The president particularly paid special tribute to President Nana Akuffo-Addo of Ghana, President Alpha Conde of Republic of Guinea and ECOWAS facilitators in the resolution of the Togolese political crisis, for their tireless endeavours towards a peaceful settlement.

“I’m also glad for the significant progress made through our collective efforts towards the resolution of the political and institutional crisis in Guinea Bissau.

“Within the framework of our regional solidarity, we have assisted the governments of Togo and Mali in tackling political and security problems while also addressing food challenges in parts of the sub-region.

“We have also extended electoral support and assistance to several countries and acted pro-actively to neutralise some potential conflicts through preventive diplomacy before they exploded. In this connection, we welcome the successful elections held in Sierra Leone and Mali in 2018,’’ he said.

The Nigerian leader further stated that the organisation’s determination to create a safe and stable sub-region must be predicated on a strong and capable ECOWAS, adding that no institution can function effectively without adequate funding.

“This would require that all hands are on deck and that all Member States ensure the payment of the Statutory Community Levy as and as when due.
“By so doing, we will empower and enable the Commission to implement the Integration Agenda, as we march towards the year 2020, and actualise our vision of building an ECOWAS of Peoples and not of States,’’ he said.

He also stressed the need for member states to join forces to eliminate those factors that were militating against a secure, conducive and prosperous environment for the benefit of the people in the sub-region.

The president noted that such actions would enable them (Member States) address the continuing fragility of the sub-region’s economies linked closely to commodity prices, nascent democracies, negative effects of climate change on farming systems and the globalisation of crime and terrorism.

“These realities remind us of the need for even stronger intra-ECOWAS solidarity in order to address emerging challenges.

“This is indeed the very sense of our Union. To that end, important decisions are taken in the course of our meetings, with the goal of impacting transforming positively on the lives of our citizens,’’ he said.

Buhari disclosed that during today’s Ordinary Session, the regional leaders would be expected to take several decisions on a number of issues.

Other matters to be deliberated upon, he said, included the Reports on the Political and Security Situation of the Region, and the Report on the Process for the Establishment of the ECOWAS Single Currency.

The Special Representative of the Secretary-General and Head of the United Nations Office for West Africa and the Sahel (UNOWAS), Mohamed Ibn-Chambas, noted that in the past months the sub-region had been witnessing the successful conduct of elections, contributing to the progress the sub-region was making in the consolidation of democracy.

Ibn-Chambas, who spoke in both English and French languages, however, stressed the need for more efforts to be made to address contentious issues related to conduct of elections to prevent and mitigate election-related violence, human rights abuses and promote respect for the rule of law.

“Upcoming elections in the sub region will present opportunities for further consolidating democracy.

“UNOWAS is coordinating efforts with the ECOWAS Commission to ensure appropriate support to these countries in their efforts to organise free, credible and peaceful elections,’’ he said.

The News Agency of Nigeria (NAN) observed that Morocco is not on the agenda of the 54th Ordinary Session of the ECOWAS of Heads of State and Government.

Morocco had made its request to be a member of ECOWAS while Tunisia requested to be an observer country.
NAN also reports that former Nigerian military Head of State, retired Gen. Yakubu Gowon, was among the dignitaries attending the summit.