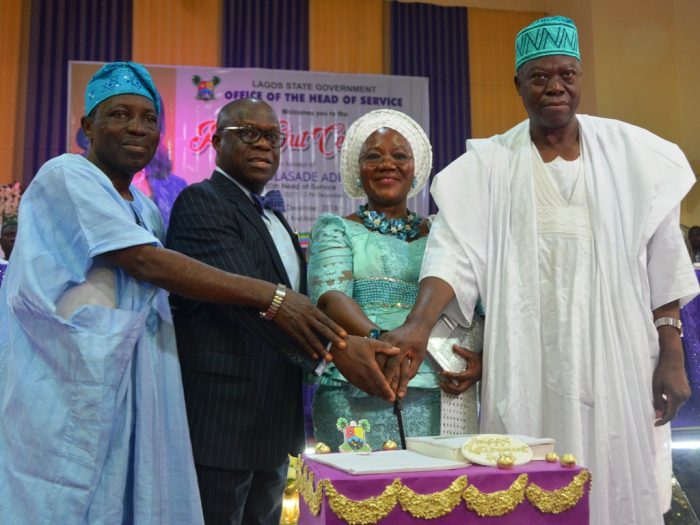 After 35 years in the state’s employ, Lagos State Head of Service, HOS, Folasade Adesoye formally bowed out of service on Thursday with a pull-out session held in her honour, even as she lamented the increasing incidence of mental health challenges within the public service.

Thousands of well wishers had thronged the Adeyemi Bero Auditorium to bid her farewell. She had been the HOS for 14 months.

Speaking at the Valedictory and Pull-out ceremony, Adesoye drew attention to the increasing incidence of mental health challenges within the public service and the necessity to address the issues as a matter of urgency.

“I wish to encourage a health sector stakeholders’ forum to facilitate a holistic discussion of issues affecting the sector in general with a view to developing a new road map. It is also important that the momentum of ongoing reforms of public service processes and procedures be sustained and aggressively cascaded to the Unified Local Government Service in order to maximise its benefits,” she said.

She urged civil servants to brace up for the challenges of the future public service, saying that one did not need a crystal ball to know that in the foreseeable future, the public service would be innovative and technology-driven.

“It would be one in which skills, knowledge, creativity, talent, competence and performance would be the primary determinant of relevance, promotion and advancement.

“Therefore, regardless of institutionalised staff motivation and/or performance reward system, I encourage you to find time to develop yourselves. Seek knowledge relentlessly, pursue education at all cost and be resilient in spirit, be optimistic about the future and invest completely and absolute trust in God,” she counselled.

Adesoye charged public servants to be mindful of the responsibility they had, individually and collectively, towards maintaining the leadership position of the public service, urging them to treat one another with respect, love and compassion, while working as a team at all times.

Speaking, Lagos State Governor, Akinwunmi Ambode, who was represented by the Attorney General and Commissioner for Justice, Adeniji Kazeem commended the HOS for rendering qualitative service to the state in the last 35 years.

He described Adesoye as a virtuous, god-fearing and ubiquitous woman who came to the Lagos State Civil Service, saw and conquered.