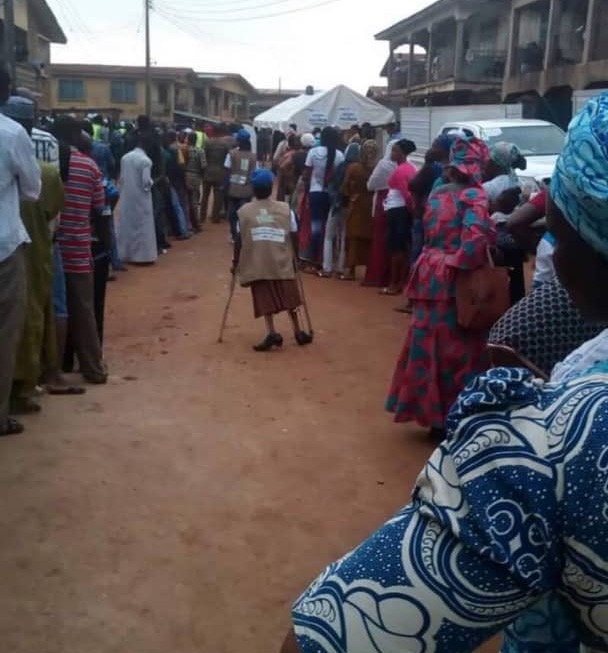 Voters on the queue at one of the filling stations

There was tight security across many South West states on Saturday as voters trooped out to exercise their franchise.

In Ibadan, a correspondent who went round the metropolis around 7.30 am reports that security presence were noticed at various junctions to forestall possible breakdown of law and order.

As at 7.30am, security personnel were seen around Mokola, Sabo, Oke-Bola, Oke-Ado, Challenge areas of Ibadan, performing stop and search operations to curtail unnecessary vehicular movement.

Some residents were noticed loitering around the various junctions possibly awaiting arrival of voting materials.

As at 7.20 am at Ward 9 at Ajeigbe Bus stop on Ring Road, officials of INEC and electoral materials were yet to arrive.

Some voters were seen waiting in groups and discussing while awaiting the arrival of the INEC officials.

Most of the voters waiting were elderly people between the ages of 50 and 70 and mostly men.

Also on ground were some party agents to monitor the elections.

As at 6:12 am, movement of voting materials to various polling units in ward 4, Ibadan North LGA, was ongoing at Methodist N5 Basic School, besides NTA, Agodi, Ibadan, being used as Registration Area Centre(RAC).

At about 7:02 am, six stern looking policemen and two personnel of the NSCDC were sighted at the junction of Agodi-gate Ibadan, enforcing the restriction of movement order.

At 7:20 am, INEC ad-hoc staff with voting materials had arrived polling units 6 and 7 located inside Methodist Primary school.

Three security officers, five party agents and scores of voters were present already on at the polling centres in the school.

At 7:30am, entrance of the State headquarters of INEC in Ibadan was heavily manned by security personnel and a armoured personnel Carrier (APC) was stationed in front of the office while Queen Elizabeth Road leading to the INEC office was blocked.

At ward 9, Ago Tapa polling unit Mokola, Ibadan North area, INEC officials have arrived with voting materials but no security officer was seen as at 8.ooam. No fewer than 20 voters were already on the queue including some aged people.

At Oyo West , Ward 5, Unit 4, Ologuro, as at 7.10am, voters turned out peacefully while INEC official with voting materials were seen setting up in preparation for accreditation and voting.

In all the wards there are security personnel including police, NSCDC, FRSC, NIS.

In Abeokuta, the Ogun capital, there was a heavy presence of security personnel across major roads.

Correspondents who monitored the security situation across the three senatorial districts report that armed policemen and personnel of sister security agencies such as the NSCDC, NDLEA , FRSC and the state-owned traffic enforcement agency were sighted at strategic locations.

Military personnel were also sighted on the highways including Lagos-Abeokuta Road, Sagamu-Ijebu-Ode Road, Sagamu – Interchange Junction of the Lagos-Ibadan Expressway as well as the Sango/Ijoko/Agbado road .

The presence of security officials were noticeable at some of the polling centres.

Restriction on vehicular movement in and out of the state also commenced at about 6..30 am along major roads although those on essential duties were allowed passage.

The Osun Police Public Relations Officer (PPRO), ASP Abimbola Oyeyemi, said that problem-prone areas had been identified in the state and necessary arrangements made to forestall any possible violence.

At Ilode 11, Ward 001B inside Catholic Technical College, Ifewara road, personnel of the Nigeria Police and Nigeria Security and Civil Defence Corps were sighted.

In Ikole, Ekiti, the police also tightened security across the nooks and crannies of the community, especially at the polling units and wards in Ikunri, Oke-Ijebu and Elekole’s palace ahead of the polls.

Private and commercial vehicles and motorcycles were not allowed to move around the major roads in Ikole -Ekiti.

At Ikunrin ward 3, Elekole Ward 4 and Oke-Ijebu ward 3, a few of the eligible voters were sighted searching for their names and number to enable them cast their votes.

In Ilorin, there was also heavy presence of some policemen on major roads in Ilorin as early as 6. 30 am, while vehicles and commercial motorcyclists made brisk business in the early hours.

On Taiwo road, there were no signs of road block for vehicles, as cars, tricycles, motorcycles were on the road.

There were few policemen moving round, while some were in their vehicles rushing to their places of deployment.

As at 7:30 am, people were seen walking by the road sides and vehicular movement continued without anybody obstructing their movement.

Although, there is a restriction from 6am to 6pm, there was still vehicular movement as at 7.45am.

The popular Unity road and Muritala Road in Ilorin were deserted while few policemen were on patrol.

At the Post Office roundabout, NSCDC officers mounted road block under the bridge checking the identity of few people on election duty before allowing them to pass.

There was presence of security operatives at polling Unit 009, University of Ilorin II, which has 992 registered voters.