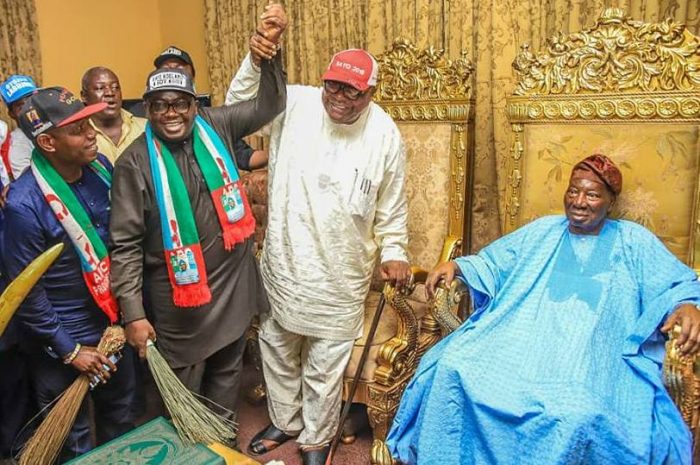 Otunba Adebayo Alao-Akala raising the hand of APC Governorship candidate, Chief Adebayo Adelabu in in the palace of Soun of Ogbomosho, Oba Jimoh Oyewumi, who is watching in admiration

The ambition of the governorship candidate of the All Progressives Congress, APC, Chief Adebayo Adelabu, has received a major boost with his adoption by 13 political parties under the aegis of the Forum of Political Parties.

This is just as a former governor of the state, Otunba Adebayo Alao-Akala, appealed to the people of Ogbomoso to rally behind the APC governorship candidate to enhance the development the historic city of warriors.

The chairmen of the 13 political parties conveyed their decision to adopt the APC candidate in a joint March 6 letter addressed to the State Chairman of the APC, Chief Akin Oke.

The ex-governor, who sacrificed his second term prospect under the Action Democratic Party to support Adelabu, had addressed a tumultuous crowd of party supporters at a mega rally held at the façade of Soun Ogunlola Hall, Ogbomoso, on Wednesday.

He had earlier visited the Soun of Ogbomoso, Oba Jimoh Oyewumi, in company with Adelabu and his running mate, Hon Samuel Egunjobi, where he said that his alliance with the APC was in the best interest of the city.

After perusing the blueprint of the two governorship candidates jostling for his endorsement, Alao-Akala said that he settled for the APC candidate based on what he called his superior credentials, track record, pedigree and ability to deliver on electioneering promises.

Urging the people of Ogbomoso to cast their vote for Adelabu of the APC, the ex-governor assured them that they would not regret their alliance with the party if its candidate emerged victorious in Saturday’s election.

He said that the enormity of the task ahead had made it imperative for a coalition of interests and the coming together of political parties desirous of making appreciable impact at the governorship election.

Alao-Akala said, “You know we are not new in this game of politics. I have carefully assessed the credentials of the people seeking my support and I have no equivocation in settling for Bayo Adelabu of the APC. My alliance with the APC for the governorship election is in our best interest in Ogbomoso. I have never misled you and I will not mislead you on this. The alliance will be of tremendous benefit to us. I have told the APC leadership, up to the national level, what Ogbomoso wants.

“I told them that Ladoke Akintola University of Technology is our own heritage here. That the hospital needs attention and we want them to bring it up to the admirable standard we dreamt fpr it. Ilorin-Ogbomoso Road has suffered inexplicable neglect over the years and I have also secured assurances that it will receive the needed attention if the APC candidate wins. Therefore, I urge you to vote for Bayo Adelabu of the APC as governor on Saturday. We stand to gain a lot from an APC government at the state and national level. I’m not in this for myself, but in the interest of Ogbomoso”.

Responding, Adelabu expressed gratitude to Alao-Akala for deeming him worthy of alliance ahead of the governorship election.

Describing the ex-governor in glowing attributes, he said his closeness with him had revealed him to be a committed and principled elder statesman, who was not driven by self-aggrandizement but the larger interest of the state.

Noting that the Ilorin-Ogbomoso road was the gateway to the North, he promised to collaborate with the Federal Government to ensure its completion if he was elected as the governor of the state.