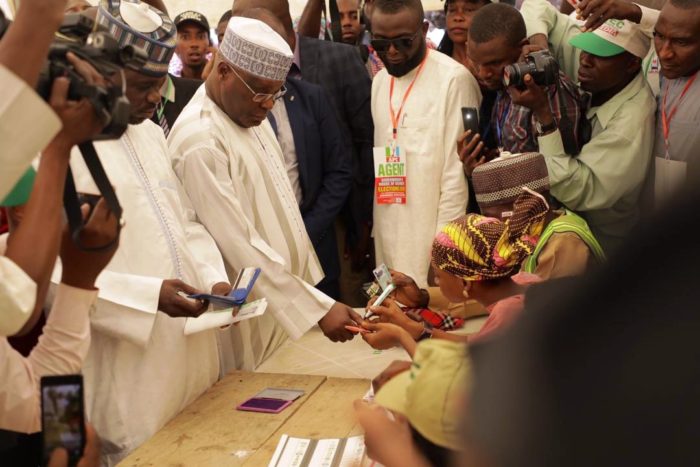 Former Vice President and Presidential candidate of PDP, Atiku Abubakar delivered his unit of Ajiya 02 of Gwadabawa Ward in Yola North Local Government of Adamawa to the candidates of his party in Saturday’s election, throwing his supporters into jubilation.

The result of today’s Governorship election announced by the Returning Officer, Dorathy Inaku showed that PDP scored 161 votes, while All Progressives Congress got 99 votes.

For the House of Assembly election at the unit, PDP got 207 votes, while APC scored 76 votes.

Atiku and PDP supporters who trooped to the unit went wild in celebration after the announcement shouting “Atikulation! Atikulation!!.”

The News Agency of Nigeria (NAN) recalled that Atiku lost the unit to President Muhammadu Buhari during the presidential election by scoring 167 to Buhari’s 186.

“Last time it was APC and today is our turn,” said a happy PDP supporter who identified himself as Bello Abubakar.

Also the gubernatorial candidate of Africa Democratic Congress (ADC), Sen. Abdul-Aziz Nyako lost in his unit 014 of Gwadabawa Ward where he got 78 votes as against PDP’s 123 and APC 63 votes at the unit