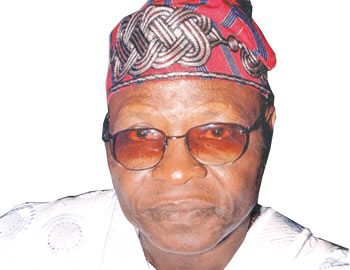 A former governor of Kwara, Chief Cornelius Adebayo, has urged the incoming government of the All Progressives Congress (APC) to ensure that the state was returned to the path of honour through rapid human and infrastructural development.

Adebayo gave the admonition on Tuesday in Ilorin.

The former governor, who was reacting to the victory of the APC in the general elections in the state, lamented the age-long backwardness of the state in terms of infrastructure.

According to him, there has been no development in the state in the past 16 years.

“Let them tell you what positive things they think they have done. Most of the things that were on ground before they came are no more visible.

“There is no longer a state-owned bank or various institutions and factories.

“Whether it is cigarette or sugar factory, Kwara furniture and others, but the worst is the issue of infrastructure.

“I don’t know what development I can point to in Ilorin. When they say they built roads in a community they don’t last four years.

“The quality of work they do, if they do at all, is appalling. So it is a commitment to the people that we are after,’’ he said.

NAN reports that Adebayo, who was governor between October 1983 and January 1984, also served as a minister for Communications under the Olusegun Obasanjo civilian administration.

“If things are worse today than they were when I was in secondary school, how do you expect me to feel?

“ With what I was getting for free, the encouragement that we received was plausible.

“If we could go as far as we went without being from the family of the wealthy, of the rich, what do I expect to do for the people that I cannot do when my position is superior to what the position of their parents are.

“Government is about what we can do for the people that ordinary people cannot do for themselves.

“But we are not seeing it any more. What they met, they destroyed it. When we came into government briefly as it was only three months in Kwara here, we knew how many schools we built.

“It is that, but we can point at the things we did that they have destroyed, that have gone bad without any effort to repair them or rebuild or to re-energise or to reconstruct,’’ he said.

He, however, urged the incoming government to govern from the perspective of the people.

Adebayo stated that the government would have to work on crucial areas such as education, health, transportation, agriculture and natural resources.

“So we expect them to focus on various crucial areas. When I was in politics I was in the Unity Party of Nigeria (UPN) where there was something we called four cardinal programmes.

“They must determine themselves what the priority programmes are and it is on the basis of their performance in those areas of their choice by themselves having been given the authority that we would assess them.

“Hence education, health, transportation, agriculture, natural resources, like water in Ilorin, as only God knows how long it has been suffering from scarcity.

“Even the distribution of power in the area here which we refer to as GRA is not what we expected. We want to see improvement,’’ he said.

On why he joined the force to oust the Peoples Democratic Party and Bukola Saraki’s political dynasty, the former governor traced this to his antecedents.

“It is my antecedents that made me join the struggle to liberate the state.

“I’m from a humble background unlike the family of the person we are fighting and that made me know what is right for the state and the people,’’ he said.