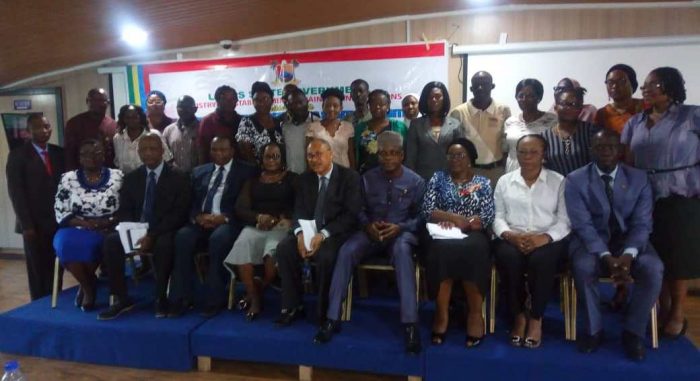 Lagos State Governor, Akinwunmi Ambode and political economist, Prof. Pat Utomi have charged intending retirees of the Lagos civil service not to be afraid of the future.

The duo spoke at a two-day training for intending retirees in Ikeja, Lagos on Thursday.

Declaring the training open, Ambode said while retirement might bring daunting challenges, civil servants had nothing to be anxious about, saying that in the first place, they had the advantage of having served an organisation that had made adequate arrangements for their future in retirement.

The governor, who was represented by the Commissioner for Establishments, Training and Pensions, Dr. Benson Oke, said the government had continued to remit money into officers’ Retirement Savings Accounts, RSA and that everyone should be proud to note that Lagos State remained, perhaps, the only state in the federation that was up to date in its monthly remittances into serving employees’ RSA.

“While many employers of labour and indeed, many State Governments do not see the need to prepare their employees for a new life, this administration, however, is a people-oriented one and we have resolved that everyone who has worked diligently for the state has to be recognised, paid his/her dues and assisted to prepare for future challenges.

“Therefore, with the benefit of the knowledge of a responsive and responsible employer in the Lagos State Government, I urge you to embrace the coming change with confidence. Without doubt, there are other challenges inherent in facing a period of retirement. Let me advise you not to be apprehensive about these. Change is built into the fabric of our lives,” he said.

The governor charged civil servants to envision a productive future by not giving up on themselves, urging them to start doing something for their future, no matter how small.

“Try new things. It is not all over for you. You can still learn new skills, read new books, meet new friends, start new ventures. Inspire others. With the wealth of experience that you have acquired over the years, you should make it your duty to inspire the younger generation. Encourage and guide them with the benefit of your acquired wisdom and experience.

“Remember to make amends. It is never too late to say sorry or to correct a wrong. As you have more time on your hands, you should reflect on the mistakes you have made and make the genuine efforts to correct them. Embrace hope. Be hopeful. Hope will gladden your heart and make your life more meaningful.

“Wait for things to turn out well. Be patient in hope even as you make efforts to do new things. Exercise. Discover light and non-strenuous exercises that you can regularly engage in. This will keep you in good health. Love others. Look out for opportunities to show love to others and, I in particular, to the less privileged. Look up. Look up to your maker and your God. He can make all things beautiful,” he counseled.

Speaking, Utomi said the Contributory Pension Scheme, CPS, was meant to give civil servants hope in retirement, a scheme, he said, was better than the former ‘Pay-as-you-go’ scheme.

He said he was happy that the state government had increased its contribution into staff’s RSA from 7.5 percent to 10 percent, saying that a bigger and better future was coming the way of civil servants with the new development.