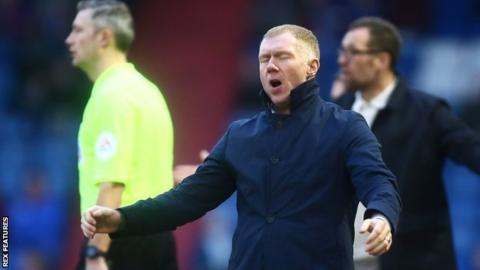 Oldham owner Abdallah Lemsagam has denied Paul Scholes left the club after 31 days because he interfered with team selection.

Scholes resigned via WhatsApp on March 14, saying it “became clear I would not be able to operate as I intended and was led to believe prior to taking on the role”.

Lemsagan says the former Manchester United midfielder’s departure was not down to any meddling on his part and told Sky Sports News he would even be open to Scholes returning to Boundary Park.

“It hurt, yes,” said Lemsagam when asked about the manner of Scholes’ resignation. “But it’s part of life.

“It’s a pity because to just send a WhatsApp was a little bit hard, not only for me but for the club.

“We will try to convince him to come back. I tried to call him many times but he did not answer.

“It’s a pity how it came out but we wish him luck. He is a really good man and maybe will be a good manager in the future.”

He said: “I was away for something like three weeks, 21 days. How can I interfere with his job when I am away in Dubai seeing my family?

“The only time I talked to him [Scholes] was about a player and whether to keep him or not. He told me he was happy to let him go.

“As chairman and as the owner, I am allowed to talk to some of the players if we don’t need them, to try and find some solution.”

Lemsagam described reports about players washing their own kit and the team bus not turning up as “not true” and is planning legal action.

“I have all the documents here,” he said. “You will see it is a lie and is damaging the club.

“I am looking at this with my lawyer because I am not going to let someone write lies about the club.”