9th Assembly: I am qualified, competent to lead House of Reps – Onyejeocha 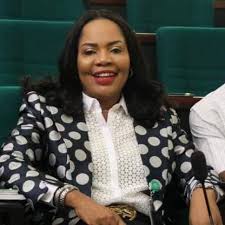 9th assembly Speakership aspirant, Rep. Nkeiruka Onyejeocha (APC-Abia), says she is competent and qualified to lead the House of Representatives because of her years of experience in the lower chamber.

Onyejeocha, who stated this at a press briefing on Tuesday in Abuja, also said that there was need for equity in the sharing of political offices in the country.

”In my over 11 years of being a member of the House of Representatives. I have served my constituents and Nigeria diligently and with distinction.

”I have sponsored several motions and bills, conducted oversight over multiple activities and initiatives of government, ministries, departments and agencies and helped to deliver meaningful constituency projects to the people of Isuikwuato/Umunneochi Federal Constituency of Abia that I represent.

”I have chaired very important committees of the House, including the Committees of Aviation and Women in Parliament.

”As the Chairperson of the Aviation Committee of the House for two sessions now, I oversighted the successful building of the new International Airport Terminal in Abuja, as well as the remodeling and renovation of several other airports and runways across the country.

”I believe that I am very well equipped with knowledge, experience and the integrity needed to manage bigger responsibilities.

”It is in the light of this, that I offer myself for consideration by my colleagues for a higher responsibility as a presiding officer and speaker of the House of Representatives of the 9th National Assembly,” she said.

According to her, as a member of APC, who struggled against all odds to win a re-election under very difficult circumstances in Abia, I believe that my party has a lot to do to help consolidate on the significant victory that the party recorded in winning this seat in Abia.

The lawmaker noted that there had been various cries of marginalisation in the sharing of top political offices in the last four years.

She said that South-South and the South-East were largely marginalised in the sharing of top political offices in the country and that it was time for healing.

The legislator, who was elected for the fourth term in the 2019 general election, said if elected speaker, she would ensure that technology was applied to the daily activities of the parliament.

She said she would ensure support for the executive while maintaining the independence of the parliament.

She also said she would ensure respect and equal treatment of all members, including those elected for the first time.

Onyejeocha promised to promote and enhance communication between the parliament, the general public and among lawmakers.