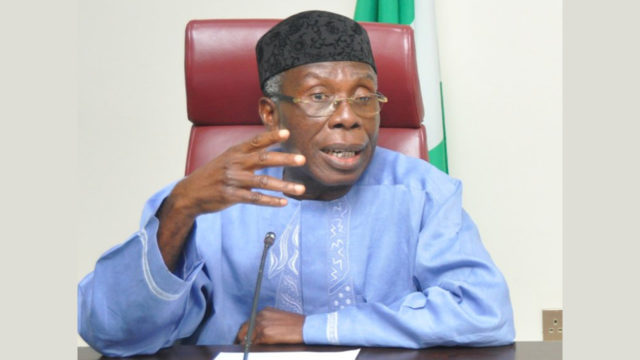 Chief Audu Ogbeh, the Minister of Agriculture and Rural Development, says the Federal Government is committed to making the country an agriculture export hub.

Ogbeh made this known on Thursday during the opening ceremony of the council’s meeting at the ongoing 43rd National Council on Agriculture and Rural Development conference in Umuahia.

The theme of the event was: “Consolidating the Strategies of Agricultural Promotion Policy for Economic Diversification and Growth”.

The Minister, who was represented by Dr Mohammed Bello of the ministry, said that Federal Government had resolved to increase agricultural productivity, reduce food importation and implement programmes that promote food safety and security.

“We shared this agenda with the stakeholders of the National Council on Agriculture at the 41st meeting held in Kano in 2016.

“It led to the articulation of the 2016 to 2020 Agricultural Promotion Policy (APP) and its Investment Financing and Implementation Plan (IFIP).”

He said that agriculture was a significant sector in Nigeria because of its contribution to food production and overall development of the nation’s economy.

Ogbeh emphasised the need for the council meeting to focus on providing a policy direction that would yield improved enabling environment for investors, attainment of food security and sustain livelihood in Nigeria.

He charged stakeholders to recommit themselves to the development of the agriculture sector, adding that it was key to good health and wealth creation.

“We are to align interests, identify interventions, rank alternatives and fine tune strategies.

”At the end, our synergy will help us achieve food sufficiency, enterprise promotion, productive employment and wealth creation in the country,” Ogbeh said.

Mr Suleiman Adamu, the Minister of Water Resources, appealed to participants to discuss as well as evolve best policies and programmes on agriculture from various perspectives.

Adamu, who was represented by Mrs Christy Odua of the ministry, said that the ministry of water resources would continually collaborate with the ministry of agriculture and rural development to promote food sufficiency.

He expressed hope that the outcome of the council meeting would make a positive impact on the socioeconomic growth of the country.