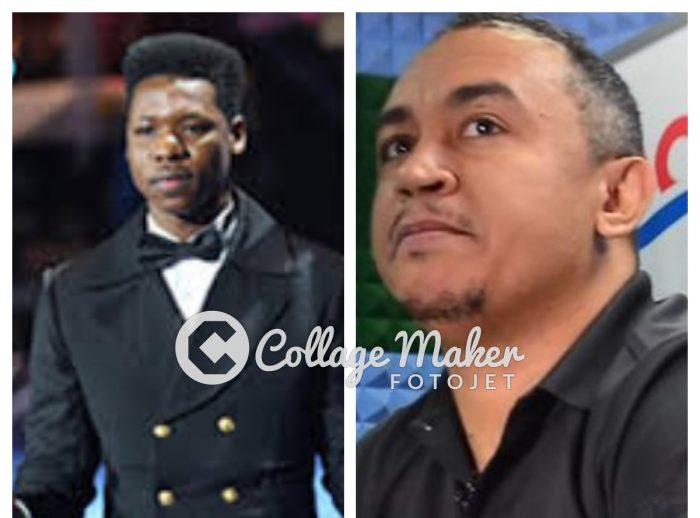 Daysman Oyakhilome Woghiren, nephew of famous Nigerian pastor, Rev. Chris Oyakhilome of Christ Embassy has attacked critic, Daddy Freeze for mocking him and calling his speaking in tongues as fake because he was mentioning foreign currency.

Daysman was recently, in a video on Instagram caught speaking in tongues and mentioning, dollars, pounds, rands and naira.

Reacting, Freeze wondered what manner of tongues the young was speaking mentioning foreign currencies and asked: “Is this the worship of God or the worship of mammon? When a man is called, is his family called along with him? Are these real tongues or just clowning around? Can anyone translate this? The scriptures say not more than 2 or 3 can speak at a time and one must interpret, can you see any interpreter here?”

“When you climb the pulpit and you speak intimately on material things, you are committing idolatory against God. We find that young man absolutely wrong. We find him a deviation from the truth.”

However, Daysman, popularly known as ‘spirit money in motion’ denounced Freeze for attacking him and other ministers.

He said people should not allow Freeze to deceive them, but that they should ensure they sow their seeds in church.

Daysman said Freeze often cited example of Bill Gate, Mark Zuckerberg and others who were rich and yet did not sow seeds in the church.

“Ensure you sow your seed in church, that is a knowledge, right?  A certain person (DaddyFreeze) on social media is a against this. Why must we sow seed in the church, because the pastors are thieves. I think you already know whom I am talking about. Ok tell us why? Bill Gate is a big man, is he sowing seed? No; Mark Zuckerberg is a billionaire, is he sowing seed? No.  I can list ten rich men who are not sowing seed, yet they are rich. So, your seed is not what makes you rich, Now another information has come, you have to lack one to carry one.”