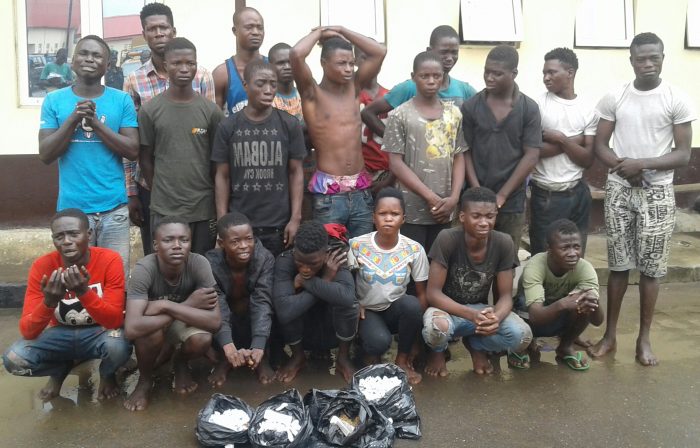 Some suspected cultists on parade after arrest

Men of the Ogun State Police Command have arrested four suspected members of a notorious cult group over the death of a young man during a birthday party at Abule Lemode area of Ijoko near Sango.

The arrest followed a distress call received by the police in Agbado divisional headquarters that a female friend Oluwatoye Ogun was having a birthday party at her father’s house on 24 May 2019 when a group of boys suspected to be cultists stormed the venue of the party at about 2 am with broken bottles and unleashed terror on the people attending the party.

The hoodlums were reported to have stabbed the father of the celebrant on the head and after that, they got hold of one Saibu Azeez 26 and stabbed him in the stomach.

The two injured persons were taken to the nearby hospital for treatment but Saibu Azeez died while receiving treatment .

Preliminary investigation revealed that the deceased was likely to be a member of a rival cult group and his assailants came on a likely reprisal attack.

The arrested suspects have all confessed being members of a rival cult group.

The corpse of the deceased has been deposited in the morgue for post-mortem examination.

Meanwhile, the state Commissioner of Police Bashir Makama has ordered the transfer of the suspects to the homicide section of the state criminal investigation and intelligence department for discreet investigation.

The police commissioner also reiterated his earlier stance against cultism in the state and vowed not to rest until cultism is completely stamped out of the state.