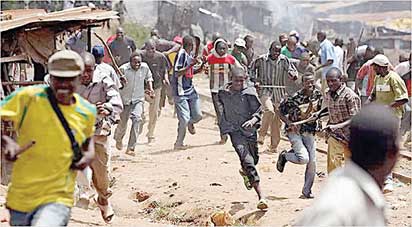 A coalition of Civil Society Organisations in Enugu State has urged incoming administrations in the country to make security of life and property their priority as they take over in May 29.

The CSOs made the call in Enugu on Tuesday during a peaceful procession to mark the National Day of Mourning and Remembrance set aside to honour victims of violent killings across the country.

The team called on the three tiers of government to put an end to the various killings across the country as they commence a new dispensation.

Speaking at the end of the procession, the Executive Director, SSDO, Mrs. Nkechi Igwe said that the nation was in mourning as a result of the killings in the country.

Igwe called on the incoming government to make the country a safe place for all by making security as their first point agenda.

In his remarks, the Executive Director of the CAPIO, Rev Fr. Ambrose Ekeroku, also decried the spate of incessant killings in the nation and called for immediate action of the government to forestall it.

Ekeroku explained that the National Day of Mourning was a citizens-led initiative to express solidarity and demand accountability for the security and welfare of all Nigerians.

The resolve for the day of mourning was reached at a meeting of more than a hundred civil society actors a year ago in Abuja, to undertake a National Day of Mourning as a symbolic action to register citizens’ dissatisfaction with the state of security.

The march kicked off at the Enugu Mall through the Nigeria Television Authority (NTA), Enugu and terminated at the Enugu State Broadcasting Service (ESBS).