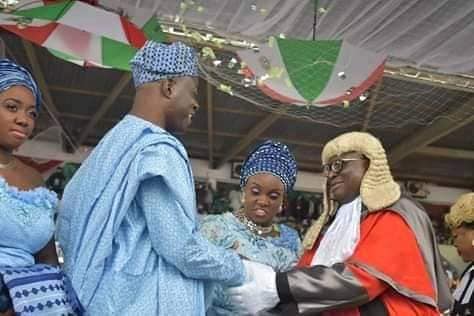 The joy of the crowd that filled the ancient Obafemi Awolowo Stadium, Liberty Road, Ibadan, knew no bounds as they witnessed the inauguration of Engr. Oluseyi Abiodun Makinde and Engr Rauf Aderemi Olaniyan as the new governor and deputy governor of Oyo State.

The stadium was filled almost to capacity by 7am such that by the time the new governor arrived at around 10am, he was unable to get to the arena for about one hour. Security operatives had a herculean task of clearing the way for the governor.

The governor, also known as ‘Omi Tuntun’, clad in a simple light blue ‘Agbada’, with a deep blue cap to match, with his wife, Tamunominni, also in blue, were very calm but obviously happy.

The oath of office was administered by the Chief Judge of the state, Justice Muntar Abimbola around noon after which the new governor went round the stadium, waving to the cheering crowd.

An ambulance, which was stationed at the stadium to cater for the spectators, was put to use when one of the attendees from Beyerunka, Ibadan, Alhaja Riskat Adebayo took ill.

Journalists covering the event did not find it easy maneuvering through the crowd and some of them were rough handled by security operatives.

In his inaugural speech, Makinde, who is known for his humility and calmness, profusely apologised for the seating arrangement at the event. He said, “I want to first and foremost apologise to our very important personalities. The seating arrangement should have been done better. We failed you. On behalf of the committee in charge, I take responsibility for that.”

Makinde, who was touched by the plight of teachers in the state declared, “I donate my entire salary to the Teachers Pension Fund”, stressing that he would not dwell on the past but would focus on the future for the benefit of the residents of the state.

Declaring that his administration would definitely make some uncomfortable decisions, he, however, noted that such decisions would be fair and just, stressing that people should hold him accountable for whatever happens during his administration.

Makinde promised to run a progressive administration, stressing that he would consult with his predecessors if there was a need to do so.

The governor, who frowned at corruption said, “I came into politics to address some ills in the system. For instance, I felt bad about the way the money meant for everybody is being siphoned. We will change this. We must shun the way things are being done”.

The new governor, who was not happy with the standard of education in the state and the fact that parents who were facing hardship were still being asked to pay N3,000 school fees per child, abolished the N3,000 school fees with immediate effect. “I am not happy that Oyo State which is a pacesetter state has over 400,000 children out of school. We want enrollment to go up. We want children out of the streets”, he added.

In order to fund education, the governor increased the annual education budget to 10 per cent stressing that he would continue to increase budgetary allocation to education until it meets the UNESCO’s recommendation of 26 percent.

He also promised, “We will seek practical ways to reposition Ladoke Akintola University of Technology, LAUTECH. We will reach out to Osun State on how to move the school forward. But I must say that our priority is total take over”.

On physically challenged people, he assured that they would have access to adequate healthcare, education and job opportunity adding that he would ensure that the private sector employs them.

Though, he noted that the state did not have the capacity to pay the recently approved minimum wage, he assured that his administration would soon pay above the national minimum wage.

He also stated that he has set up a committee to look into the case of those who were wrongly dismissed from the civil service by the past administration, promising that anybody with genuine issue would be reabsorbed.

The new governor also opened the overhead bridge linking the secretariat which the administration of Senator Abiola Ajimobi had locked for the past eight years for public use.

“I will be people’s governor. I will run an all-inclusive government regardless of tribe, religion, political affiliation and social classes. The overhead bridge linking the secretariat will now be called ‘Freedom Bridge’. It is now opened to all people with immediate effect. Being a leader should not be a way to dominate. As a governor, I will not rest until my people are comfortable”.