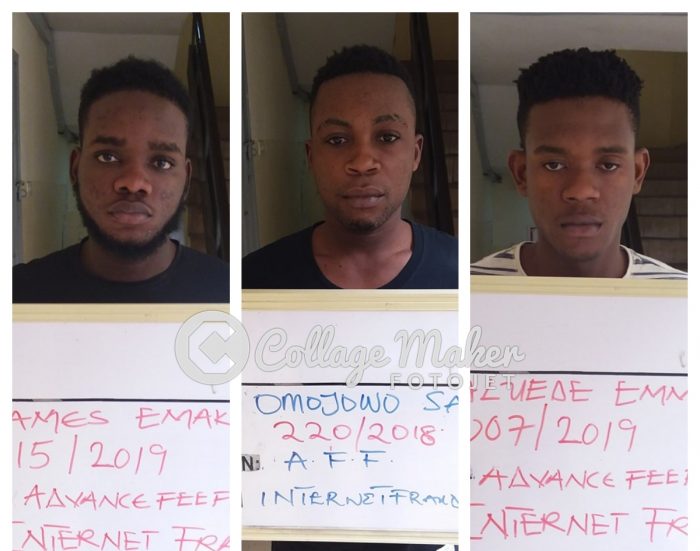 The Economic and Financial Crimes Commission, EFCC, Benin Zonal Office on Thursday secured the conviction of three suspected fraudsters before Justice A. A. Demi-Ajayi of the Federal High Court sitting in Benin City, Edo State.

Omojowo Samuel was arraigned on a three count charge bordering on intent to defraud and impersonation. Samuel alias Ademola Faith, Ademola Joy and Ademola Blessing is alleged to have sometimes in 2018 in Benin within the jurisdiction of the court with intent to defraud obtained the sum of N725,650 from one Muhammad under the pretence that the money was meant for the purchase of Customs Service Auction sale of a Toyota Camry which turned out to be false.

Upon arraignment, Samuel pleaded guilty to the charge.

In view of his plea, the prosecution counsel, Fredrick Dibang prayed the court to sentence and convict him accordingly.

However, the defence counsel, M. I. Oriazowanlan prayed the court to temper justice with mercy as the defendant was a first time offender and has promised never to return to the crime.

Justice Demi-Ajayi convicted and sentenced the defendant to two months imprisonment and a fine of N100,000. The defendant is also to forfeit the sum of N705,000 as restitution for the victim.

The duo of Aluede Emmanuel and James Emakhu were arraigned and convicted respectively on a one count charge of impersonation with intent to obtain money contrary to Section 22(2)(b)(IV) of the cyber crime (prohibition, prevention etc) Act 2015 and punishable under section 22(2)(b)(IV)) of the same Act.

Emmanuel was alleged to have impersonated one Williams Alexandes on a dating site in order to hoodwinked Miss Frida Estrada with the intent to obtain money from her while Emakhu was alleged to have faked his identity in his attempt to defraud one Miss Lucci Allion, a Polish citizen.

The charge against Emmanuel reads: “That you, Aluede Emmanuel (alias Williams Alexandes) sometime in 2018 in Uromi, Edo State within the jurisdiction of this honourable court did fraudulently impersonate the identity of one Williams Alexandes on a dating internet site to one Miss Friday Estrada which identity you claimed to be your own with the intent to obtain money from her and you thereby committed an offence contrary to Section 22(2) (b) (ii) of the Cyber Crime (prohibition prevention etc) Act 2015 and punishable under Section 22(2)(b)(IV) of the same Act.”

Upon arraignment the defendant pleaded guilty to the charge.

Justice Demi-Ajayi thereafter sentenced the defendant to two (2) months imprisonment and a fine of N150,000. The court also ruled that all assets recovered from the defendant as proceeds of crime be forfeited to the victim through the federal government of Nigeria.

Two months imprisonment and a fine of N150000 is the lot of James Emakhu who also pleaded guilty to a one count charge. He is also to forfeit all assets traced and recovered from him to the victim through the federal government of Nigeria as proceeds of crime.