Rebellion mounts against CAN President Ayokunle 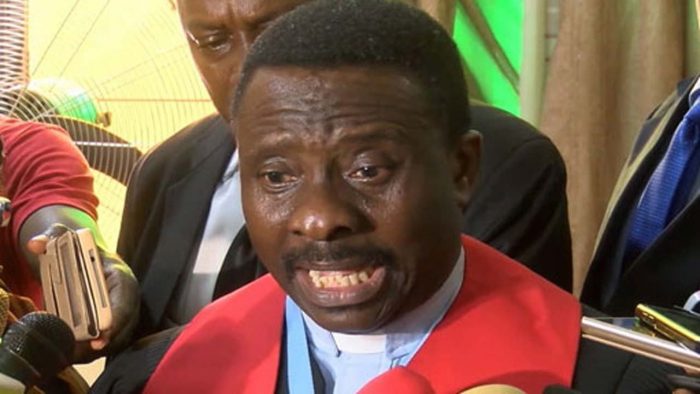 Reverend Samson Ayokunle, President of CAN

Rebellion is mounting against Reverend Samson Olasupo Ayokunle, president of the Christian Association of Nigeria since 2016.

While one group of dissidents, made up of 63 christian associations, wants to block his re-election, another group has called for his resignation within seven days.

The Group of 63 that styles itself Advocates for Freedom and Democracy (AFD),in a letter said Ayokunle does not deserve re-election and called for a new leadership that will reposition CAN.

The group claims Christians have become an endangered specie in Nigeria, with the faithful confronted with ‘existential threat’.

“Church in Nigeria in our day is confronted with an existential threat from Islamists emboldened by foreign governments and their local collaborators in high and low places”, the group said in a letter signed by Prof. Kontein Trinya, Prof Joshua Ojo and Barr Isaac Eze.

“Daily, we are inundated with very saddening news of the abduction of priests and Christian traditional leaders, forced conversions, Christian girls being forcefully ‘married’ off to Islamists, Christian villages being overrun and resettled by jihadists, massacres at educational institutions, etc., all of which appears to be swelling to the eventual Armageddon, unless someone rises soon.

“Against that painful background is the never-before assignment of only Muslims of a particular northern extraction to head virtually every arms-bearing security agency in Nigeria; a pattern that has been replicated in every other strategic agency, for example, the education sector. The only exception in that sector is the Joint Admission and Matriculation Board where the Moslem head is from the south-west, but who is also the Secretary General of the Supreme Council of Islamic Affairs”.

As if the issues raised by the Group of 63 were not enough, the Concerned Christian Forum of Nigeria (CCFN) raised the gear of rebellion to another level by alleging that CAN has been taken over by politicians and ethnic bigots who now see the association as a tool to be used at will.

The CCFN reportedly comprising eminent pastors in the country, said they were not comfortable with the direction of CAN and the church which it accused of drifting aimlessly.

According to the group, CAN, which was established in 1980, had an original project to unite the body of Christ as a counterweight to the growth of political Islam.

CCFN lamented that the association no longer has the voice as it is now “fast drifting into something of a chortle device, a tool in the hands of politicians and champion for ethnic-sectarian bigots.”

Rev. Prince Thompson, spokesman of the group urged Ayokunle not to seek re-election as the president and lampooned his leadership of falling short of the massive expectations.

“CAN’s leadership under the current president, Reverend Supo Ayokunle, was highly anticipated to be reformists enough to return the association to its lost glory, for it to carry out a practically cleansing of CAN to free it of the dirt clinging to it from wallowing in the mire with swine.

“Our hopes in Reverend Ayokunle being able to deliver CAN from the shackles of materialism have been dashed. Beyond having our hopes dashed we are being made despondent because under his leadership ‘the high places were not taken away’ but they were rather made higher. Truth is being sacrificed on individual private altars built to glorify self,” the group said.

“We have come to the realisation that the violence to the body of Christ cannot be allowed to continue for longer lest there will be more atheists and agnostics than Christians by the time Reverend Ayokunle’s leadership of CAN completes its tenure.

“The Concerned Christian Forum of Nigeria, therefore, demands the immediate resignation of Reverend Supo Ayokunle as CAN President. Our demand entails that the entire CAN executive resigns with the president to allow the association replace them with a leadership that will chart a course that conforms with the ideology upon which CAN was founded,” the pastors said.

Rev. Ayokunle is yet to respond to the dissidents within.

Ayokunle, who was the President of the Nigerian Baptist Convention (NBC) was elected CAN President in June 2016.

He contested for the post as the candidate of the Christian Council of Nigeria, CCN, beating Elder Joseph Otubu of the Motailatu Church Cherubim and Seraphim Movement (MCCSW) with 57 votes to 28. Ayokunle is a member of the World Council of Churches.