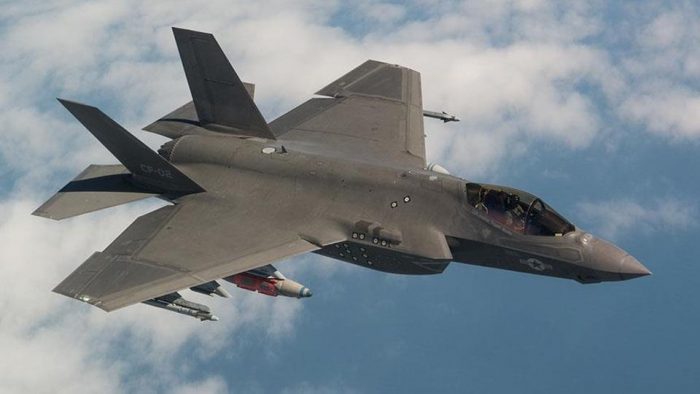 The F-35 fighter jet: US threatens to cut off Turkey's supplies

The United States on Friday gave Turkey until the end of July to abandon its purchase of a major Russian missile defence system, which Washington considers incompatible with Ankara’s participation in the F-35 fighter jet program.

If by July 31 Turkey does not renounce the S-400 system, Turkish pilots training in the United States on the F-35 will be expelled, and agreements with Turkish firms subcontracted for manufacturing the F-35 stealth warplane will be cancelled, Ellen Lord, undersecretary of defence for acquisition and sustainment, told reporters.

Lord said the deadline “will allow sufficient time for Turkish personnel associated with the F-35 program to be reassigned and depart the United States… to facilitate an orderly cessation of Turkish participation.”

She justified the US ultimatum by the fact that Turkey, a NATO ally of the United States, had already sent its personnel to Russia to start training with the S-400.

On Tuesday, Turkish President Recep Tayyip Erdogan said his country was “determined” to proceed with the Russia deal.

US officials have said they expected Turkey to opt for the American Patriot air defense system instead, arguing that would allow the F-35 program to continue.

Turkey plans to buy 100 US F-35s and its defense industry has invested significantly in the warplanes’ production.

Erdogan said he told the US that Ankara would take steps to buy Patriots only if Washington’s conditions of delivery were as positive as Moscow’s.

“But unfortunately we haven’t received a positive proposal from the American side on the subject of Patriots like the S-400s from Russia,” he said.

Acting US Defense Secretary Patrick Shanahan said he had sent a letter to his Turkish counterpart Hulusi Akar informing him of Washington’s decision.

The US offer for the Patriots was “very competitive,” Shanahan told reporters.

The F-35s are designed to operate in sync and in real-time with NATO’s military systems, including anti-missile defenses, raising US fears that Russia could fine-tune the S-400’s capacities against the Western alliance through information gleaned in Turkey.

The United States in June 2018 “delivered” four of the F-35s to Turkey but kept the planes in the United States, officially to train the Turkish pilots.

If Turkey does not renounce the deal with Russia by July 31, Turkish companies — which make 937 different parts of the F-35 — will be granted no further subcontracts with their roles reassigned to other firms, Lord said.

Of the components, around 400 are made only in Turkey, notably landing gear parts and titanium rotor blades.

Aeronautics giant Lockheed Martin and engine maker Pratt & Whitney have already started to seek new suppliers, although Turkish companies will be able to finish orders that were already in the works, Lord said.

She said that Turkey’s participation would be finished by early 2020.

“Turkey still has the option to change course,” she said.

“If Turkey does not accept delivery of the S-400, we will enable Turkey to return to normal,” she said.

Launched in the 1990s, the F-35 is the most expensive program in the history of the US military. The Pentagon estimates its cost at $400 billion, with a goal of manufacturing nearly 2,500 planes in the decades to come.

Tensions have been on the rise in recent years between the United States and Turkey as Erdogan increasingly seeks a major role in the Islamic world.

Turkey has pressed President Donald Trump to remove US troops from Syria but the United States has worried over the fate of US-allied Kurdish fighters, who are linked by Erdogan to separatists at home.

Removing one impediment to ties, Turkey last week freed a NASA scientist with dual citizenship, the second American released after being rounded up in Erdogan’s sweeping crackdown following a failed 2016 coup.