$8m fraud: Ajudua swore with son’s life not to defraud me – Bamaiyi 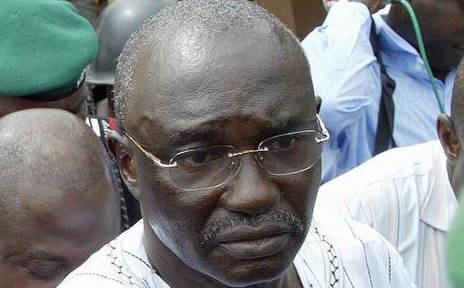 A former Chief of Army Staff, Lt.-Gen. Ishaya Bamaiyi, on Friday told an Ikeja High Court that Fred Ajudua, alleged serial conman, defrauded him in spite of swearing with his son’s life.

Bamaiyi made the disclosure while being cross-examined by Ajudua’s counsel, Mr Olalekan Ojo, at the resumed hearing in allegedly swindling of Bamaiyi of 8.4 million dollars at the Kirikiri Maximum Prisons by Ajudua in 2004.

Friday’s session was the fifth in the proceedings in which Bamaiyi was cross-examined by the defence since giving his evidence-in-chief on Nov. 26, 2018.

Responding to Ojo’s question on why he did not ask for receipts from Ajudua as proof of receiving the funds, Bamaiyi said that he trusted Ajudua not to defraud him.

He noted that his trust was further strengthened when Ajudua swore with his son’s life not to defraud him.

“I trusted him completely; you don’t understand the concept and level of trust I had.

“I’m a father and a grandfather. I understand these things. If as a father he (Ajudua) swears that his only son should die if he should defraud me; that is more than sufficient receipt.

“When he defrauded me, I initially kept quiet. It was after he ran away for six years that I decided to complain. By God, I never knew I will find myself in court,” Bamaiyi said.

The former army chief said that the funds given to Ajudua for payment for the legal services of Chief Afe Babalola (SAN), were brought to him in prison by family members, friends and staff.

He said that prison rules allowed money meant for the payment of legal representation to be brought into the premises of the prison, adding that he recorded every money brought to the prison in his diary.

“Sometimes money was put in our food containers. The money is counted in the presence of the prison officers, so it was not hidden.

“My lord, I said it before and let me repeat it, when visitors come with the food containers, he who brings the food will taste it so that they will not poison the inmate.

“The food container has food on top; that is the one they will taste. Money is kept underneath the container.

“I can remember the specific amount each person brought; my former ADC, Timothy Chechet, brought one million dollars on two different occasions,” he said.

He said the individuals who brought some of the foreign currencies, gave statements to the Economic and Financial Crimes Commission (EFCC) confirming that they brought money to the Kirikiri Maximum Prisons.

Explaining the source of the funds, Bamaiyi said that the money was given to him by friends who did not want their identity disclosed.

He also said that the funds were sourced from his personal savings, property and farming businesses, adding that some of the funds were withdrawn from his account at the defunct Nal Merchant Bank.

Following the revelation, Ojo requested for a copy of Bamaiyi’s statement of account, saying that the prosecution had not frontloaded a copy of the statement to the defence.

On his part, the prosecuting counsel for EFCC, Mr Tope Banjo, said that an additional proof of evidence containing the requested bank statement would be filed in court by the prosecution at an adjourned date.

The Judge, Justice Josephine Oyefeso, adjourned the case until Sep. 16 and 19, 2019, for continuation of trial.

The prosecution alleged that Ajudua had alongside some accomplices, approached Bamaiyi in the prison in 2004.

The defendant had allegedly convinced Bamaiyi that he could hire the legal services of Chief Afe Babalola (SAN) to help secure his freedom from Kirikiri, and Ajudua allegedly fraudulently collected 8.4 million dollars as the legal fees.

When the alleged fraud came to light, the law chambers of Afe Babalola and Co. issued a disclaimer disassociating itself from the case.