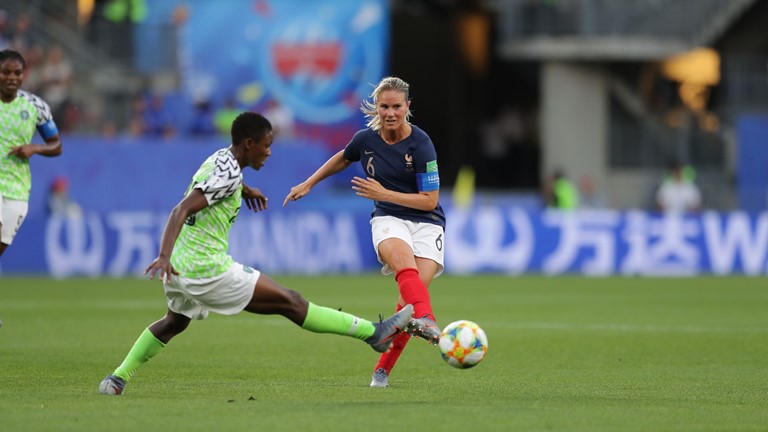 Some action in the Nigeria-France match in Rennes

Nigeria and France are still all square in the final Group A match in Rennes, France, after the first 45 minutes.

Although the French ladies had overwhelming possession, 69-31 per cent, the two sides have been unable in the first half to threaten their keepers.

It was a game that saw the Super Falcons at their defensive best with a disciplined performance. Young fullback Chidinma Okeke impressed in her first FIFA Women’s World Cup, as did Halimatu Ayinde in her screening role.

The French have also created more panic towards Nigeria’s half. Nigeria has had 10 goal kicks to French’s 2. And to underscore the pressure they have mounted, the French too had more corner kicks than Nigerians 4-2.

Other highlights in the game at Roazhon Park, that is well attended were that Ngozi Ebere of the Super Falcons was booked in the 28th minute by referee Melisssa Paola Borjas Pastrana, while Valerie Gauvin of France also got a yellow in the 45th minute after hitting Onome Ebi with his leg, as she tried to take a bicycle kick.

The second half is underway.