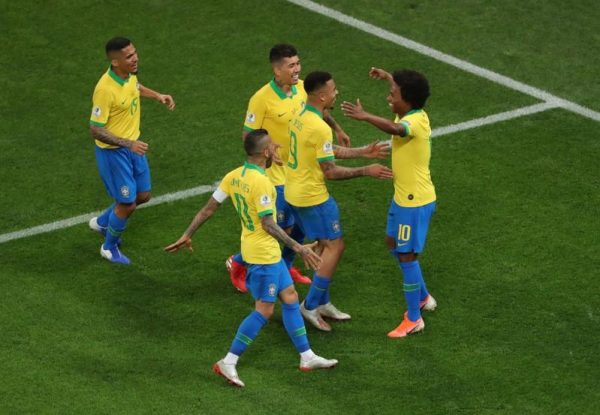 Hosts Brazil gave a five-star performance Saturday, thrashing Peru 5-0 to qualify for the quarter-finals of Copa America. Gabriel Jesus missed the spot kick in the 90th minute that would have taken the scoreline 6-0.

Casemiro opened scoring with a header in the 12 minute, with Roberto Firmino adding a second goal seven minutes later, after a goalkeeping error. In the 32nd minute, Everton scored Brazil’s third, with a low shot, to register their imperious intent, that they were in the mood for a goal feast.

In the second half, Dani Alves took Brazil’s taly to four goals, while substitute Willian added a fifth before the final whistle.

The result, combined with Venezuela’s 3-1 win over Bolivia, means the hosts top Group A and will play one of the two third-placed teams at the Gremio arena on Thursday.

Second-placed Venezuela will face the second team in Group B on Friday at the Maracana stadium in Rio de Janeiro, while Peru must wait to see if their four points are enough to earn them a place as one of the two best third-placed sides.