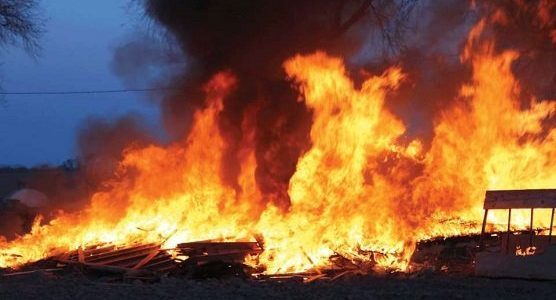 The fire reduced most parts of the 25 room hotel to rubble with only about three rooms at the front left standing without a roof.

Mr. Prince Anyanwu, manager of the hotel, told newsmen on Monday that the fire started at about 5.30 p.m from an inner room in the building.

“Then we called the Fire Service but we were told that their driver was not around and that there was no diesel to move their fire truck.

But before the Fire Service could reach here, the whole building had been engulfed by fire.

“The building housed a hairdressing salon, a boutique, a baby items shops and the hotel,” he explained.

He said they first saw the fire from room 13 in the building and never had reason to suspect the Enugu Electricity Distribution Company power supply as the cause because there was no electricity when the fire started.

Anyanwu said that their own generator was powered before the fire but noted that the fire did not emanate from an electrical source, which could have possibly affected their generator.

According to him, they had to shut down their power source when the fire started, to help curtail the outbreak.

The Proprietor of the Hotel, Chief Chinedu Ezinwa, said the fire took everything from him. “It has destroyed my income source. As I am now, I am nothing because everything I have has been consumed in the fire.

“Everything that the fire damaged is estimated at N20 million, with the situation of things in Nigeria.

“The Fire Service did not come on time. When someone was sent, they said they had no fuel and that the driver was eating near the main motor park.

“They waited for him to come and when they came, they also did not have enough water and left after a trial but returned again later.

“Aba people did much for us during the fire by saving the two adjourning buildings from being burnt too. They helped much although some bad eggs also stole many things from us,” he said.

Ezinwa urged the state government to provide the fire service with the necessary tools to work, adding that if it had not been for the assistance of Aba residents, somebody would have died from the fire.

He said the servicemen should be paid promptly and provided for to save the city from burning down in the future.

Mrs. Jane Ikechukwu, a hairdresser in the building, said she came to work on Sunday and later left with instructions on when her apprentice should close.

“Sooner, she began to call me on phone telling me that the building was on fire.

“Before I could run down here everything had gone up in flames. But I was able to salvage some things like chairs, and my appliances,” she said.

He said that contrary to reports, the Service learnt of the Fire by 6.05 p.m but they reached the scene by 6.10 p.m