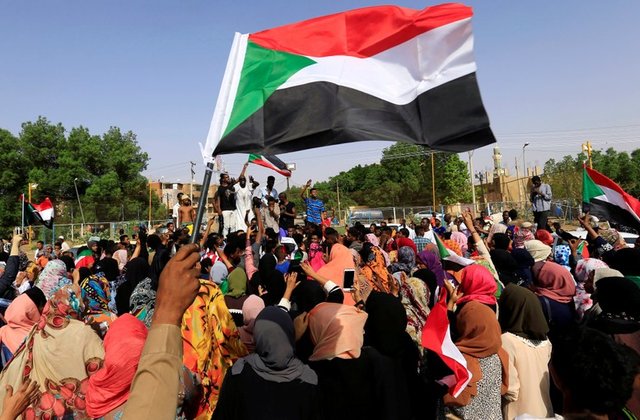 Sudanese people chant slogans and wave their national flag as they celebrate, after Sudan’s ruling military council and a coalition of opposition and protest groups reached an agreement to share power during a transition period leading to elections, along the streets of Khartoum, Sudan, July 5, 2019. (Reuters photo)

The United States on Saturday welcomed a power-sharing agreement between the Sudanese military and opposition and called for accountability for the military’s bloody crackdown on protesters, dpa news reported.

“According to the agreement reached on Friday, the main opposition grouping, Forces for Freedom and Change (FFC), and the military are to take turns at the helm of a sovereign council for a period of three years,’’ state news agency SUNA reported.

State Department spokeswoman, Morgan Ortagus, said in a statement that the agreement between the FFC and the Transitional Military Council to establish a sovereign council was an important step forward.

According to Ortagus, U.S. looks forward to the “immediate resumption” of internet access, the establishment of a new legislature and “accountability for the violent suppression of peaceful protests’’.

She said that Don Booth, the U.S. Special Envoy for Sudan, would continue to support the mediation process.

“The deal, which comes after weeks of stalemate and crackdowns on protesters, will see six civilians on the 11-seat sovereign council and five military personnel, one of the protest groups.

“The first 21 months of the three-year period will have a military official heading the council, the last 18 months a member of the opposition,’’ the Sudanese Professionals Association (SPA), said on their official Facebook page.