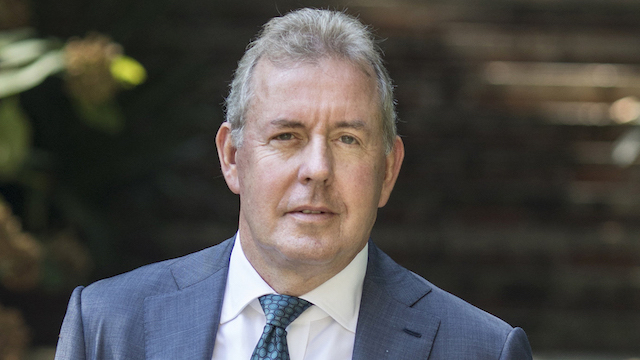 U.S. President Donald Trump said his government will no longer deal with Kim Darroch, the ambassador of the United Kingdom in Washington, who attacked his administration in a leaked memo as “dysfunctional” and “inept.”

Trump also attacked Prime Minister Theresa May, despite Britain expressing regret for the leak of the confidential memos.

“I do not know the Ambassador, but he is not liked or well thought of within the U.S. We will no longer deal with him,” Trump wrote on Twitter on Monday, virtually declaring the blunt ambassador a persona-non-grata in the United States.

Trump in his tweet not only criticised British Prime Minister Theresa May for her handling of Brexit, she slammed her and the ambassador for creating a mess.

He said May disregarded his advice, but was upbeat that Britain will soon have a new prime minister.

“The good news for the wonderful United Kingdom is that they will soon have a new Prime Minister. While I thoroughly enjoyed the magnificent State Visit last month, it was the Queen who I was most impressed with!” Trump wrote.

Hours after Trump’s tweet, May’s spokesman reiterated Britain’s position that the leak was unfortunate and said Darroch “continues to have the prime minister’s full support.”

Trade minister Liam Fox, who is visiting Washington, told BBC radio he would apologize to Trump’s daughter Ivanka, whom he was due to meet.

“I will be apologising for the fact that either our civil service or elements of our political class have not lived up to the expectations that either we have or the United States has about their behaviour, which in this particular case has lapsed in a most extraordinary and unacceptable way,” he said.

“Malicious leaks of this nature … can actually lead to a damage to that relationship, which can therefore affect our wider security interest.”

The memos from Kim Darroch, ambassador to Washington, were divulged to a Sunday newspaper, annoying Trump and embarrassing London.

“Contact has been made with the Trump administration, setting out our view that we believe the leak is unacceptable,” May’s spokesman told reporters. “It is, of course, a matter of regret that this has happened.”

It was unclear whether his message had been relayed before Trump posted his tweet. It was the U.S. president’s second broadside against the British ambassador, whom he criticized on Sunday as not having “served the UK well.”

Britain is hoping to strike a major trade deal with its closest ally after it leaves the European Union, an exit scheduled for Oct. 31.