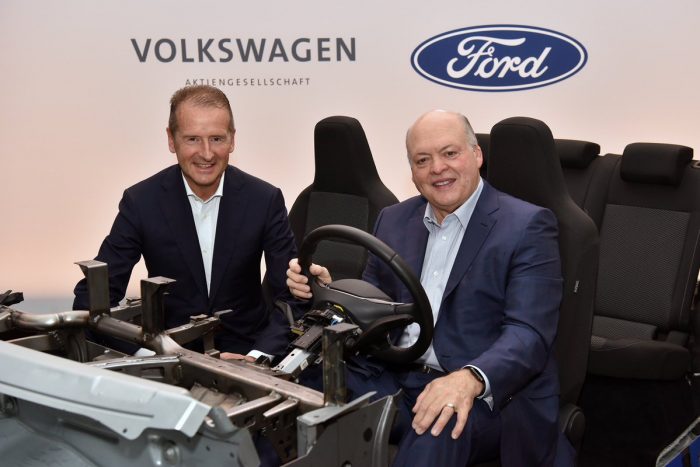 Ford and Volkswagen have joined forces to develop autonomous and electric cars and said they were also looking at other areas of cooperation, deepening a global alliance to slash development and manufacturing costs.

Ford and VW have already started cooperating in the area of commercial vehicles as part of the auto industry’s broader effort to redraw production and sales footprints to cope with more stringent regulation and fragmented markets.

“Our global alliance is beginning to demonstrate even greater promise, and we are continuing to look at other areas on which we might collaborate,” VW’s Chief Executive Herbert Diess said.

Ford expects to build more than 600,000 electric vehicles sourcing components and the vehicle underpinnings from VW, helping both companies to drive down costs.

Analysts at Citi said Ford licensing Volkswagen’s MEB platform is a “transformational” step for both companies.

“It likely provides VW with an unassailable scale advantage,” Citi analyst Angus Tweedie said in a note published on July 10.

The broader alliance, which covers collaboration beyond joint investments in Argo AI, does not entail cross-ownership between the two companies.

Ford created Ford Autonomous Vehicles LLC in 2018, pledging to invest $4 billion until 2023 and has sought outside investors to help share the spiralling cost of developing autonomous vehicles.

Volkswagen will contribute its Autonomous Intelligent Driving (AID) company to the venture. VW will purchase Argo AI shares from Ford for $500 million over three years.