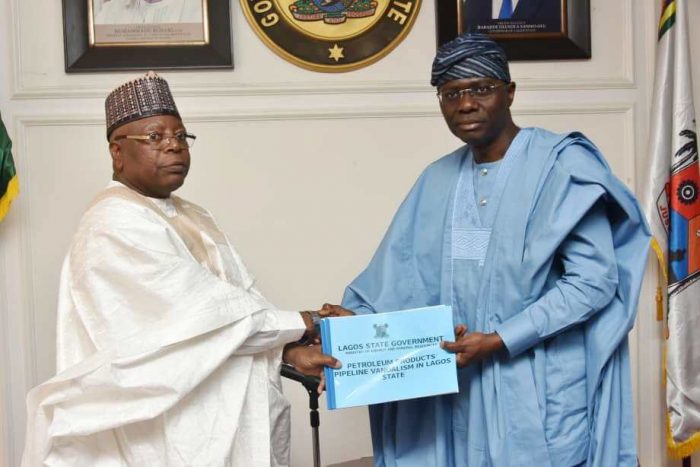 Lagos State Governor, Babajide Sanwo-Olu, has said the State Government is working with the security agencies to bring perpetrators of the Ijegun pipeline fire to justice.

No fewer than 12 people died in the fire last week Thursday, which resulted from activities of criminals vandalising oil pipelines in the community.

Sanwo-Olu spoke while receiving members of the ad-hoc committee set up by the Senate to investigate the root cause of the inferno.

The seven-member Committee, led by Senator Ibrahim Gobir, met with the Governor in Alausa on Friday.

Sanwo-Olu hailed President of the Senate for constituting the ad-hoc Committee, following a motion by the Senator representing Lagos West, Solomon Adeola.

The Governor said the gesture showed that the entire members of the Senate felt the pain of loss with Lagosians.

He said: “I convey my best wishes to the leadership of the Senate led by the Senate President, Ahmed Lawan, for responding quickly to this very urgent national assignment. I watched the debate on Ijegun fire on the floor of the Senate and I saw how several Senators felt the pain we are feeling in Lagos.

“I thank all the Senators for showing compassion and the human side of them to assuage the pain we are feeling following the loss of lives. I appreciate members of the ad-hoc committee for coming out swiftly to investigate the root cause of this unfortunate incident.

“We are concerned about the damage to lives and property that trailed the incident. We are working with security agencies to put all these criminality to a stop. We are hopeful that we will identify the perpetrators; whatever level they are, they will be brought to justice. Bringing them to justice will serve as deterrent to other criminals who are bent on perpetrating economic sabotage at the expense of innocent people’s lives.”

The governor expressed concern that the issue of pipeline vandalism kept re-occurring in the state, urging members of the committee not to leave any stone unturned in unraveling the root cause of the crime.

As part of measures being taken by the state government to ensure the crime did not re-occur, Sanwo-Olu said he met with traditional rulers in the state to sensitise them on the need to join hand with the government and security agencies to secure Federal Government’s assets in their localities and also fish out criminals engaging in economic sabotage.

Sanwo-Olu said he was hopeful that the recommendations of the committee members would bring about lasting solution to the problem.

He said: “We are hopeful that the suggestion and recommendations that will be coming out of this committee would bring about lasting solution to the problem. For us, we need to put the incident behind us. Security operatives must step up to ensure Lagos is safe.”

Sen. Gobir promised the committee members would ensure thorough investigation into the matter, assuring that the committee’s recommendations would help the Federal Government to take far-reaching approach to tackle vandalism.

Sen. Adeola, who moved the motion leading to the constitution of the ad-hoc committee, renewed the call for community policing, noting that it would help in checking re-occurring activities of pipeline vandalism. He said empowering community members to secure their neighbourhood against vandals would help the security agencies in tackling the problem efficiently.

The lawmaker hailed the Senate leadership for responding to the call to investigate the cause of pipeline vandalism in his senatorial district.

Other members of the committee, who visited the Governor, included Senators George Sekibo, Hassan Lawali, Muhammed Musa, and Degi-Eremionye Wangagha.