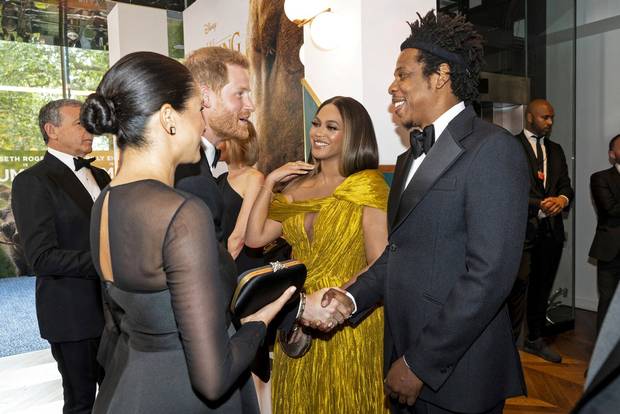 Two forms of royalty collided as American singer and actress, Beyoncé Knowles-Carter and her husband Jay Z met Meghan Markle and her husband, Duke of Sussex at the European premiere of The Lion King in London’s Leicester Square.

Beyoncé and Meghan Markle were introduced during the premiere of the movie where they embraced and chatted as their husbands Prince Harry and Jay Z also enjoyed one another’s company.

The “Crazy in Love” singer, who voices the character of Nala in the new Disney film, was beaming with excitement over meeting the royal.

This marks the first time the former actress hits the red carpet as a royal, just two and a half months after giving birth to her first child Archie, where she and Harry led a star-studded line-up as they attended the movie premiere.

So as the royals walked to the entrance of the cinema greeting fans, Beyonce and Jay-Z were forced to make a hasty arrival via a side entrance in order to be in position for the meet and greet – to the disappointment of some fans.

While they had not met before, Beyonce paid homage to Meghan earlier this year at the Brit Awards.

Inside the Odeon cinema, Meghan greeted Beyonce warmly, the two women hugging each other like old friends.

The singer, dressed in a daring yellow evening gown split to the thigh, rubbed Meghan on the back as the pair continued to embrace for several seconds.

They then held hands and chatted intently as Jay-Z looked on.

There was also a big hug from the duchess for the rapper who congratulated her, presumably on the birth of baby Archie.

“The baby, so beautiful,” cooed Beyonce. “We love you guys.”

Meghan then turned to introduce her husband, dressed in a dashing tuxedo, who greeted Beyonce with a kiss on each cheek and Jay-Z with a handshake.

“You’ve been rather busy,” said Harry to Beyonce.

“Congratulations on the birth of your baby,” Jay-Z said to the prince, and nodded towards Meghan.

“And how are the twins,” asked the prince, in reference to their children, Rumi and Sir, born in 2017.

“They are not here. They don’t come on every trip,” replied Beyonce.

“We left them at home. They would loved to have been here.”

Jay-Z added: “The best advice I can give you, always find come time for yourself.”

The premiere is being held in support of the conservation and communities work undertaken by Harry through his new charitable foundation.

For the time being, the funds will be channeled through The Royal Foundation, which the duke operates in conjunction with the Duke and Duchess of Cambridge and Meghan.

In celebration of the hugely-anticipated film’s release, Disney has announced Protect the Pride, a global campaign working with conservation partners to raise awareness and support efforts to protect and recover the dwindling lion population across Africa.

Since The Lion King was first released 25 years ago, half of Africa’s lions have disappeared.

Lions face rising threats such as poaching, loss of prey and destruction of habitats.

However, research shows the lion population can recover and the Royal Foundation is supporting Protect the Pride.

Harry has long had an interest in conservation issues on the African continent and on leaving the Army in 2015 spent three months working on the number of such projects in Namibia, Tanzania, South Africa and Botswana.

He is now president of African Parks and Patron of Rhino Conservation Botswana.

Harry, Meghan and Archie will go on an official visit to South Africa this autumn. The duke will also visit Angola and Malawi.

After Sunday’s premiere, Harry and Meghan were set to meet representatives from organisations doing ground-breaking work in the areas of conservation and the environment.