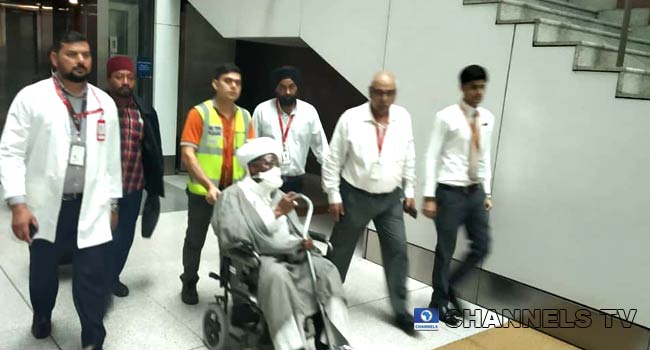 Shiite leader Ibrahim El-Zakzaky has alleged that the condition at the Medanta Hospital in India, where he was taken on Tuesday is worse than that of Nigeria and the prison.

Premium Times, quoting a trending audio of El-Zakzaky, said the religious leader would love to return to Nigeria or seek the services of doctors in Turkey or Malaysia.

The leader of the Islamic Movement in Nigeria (IMN), was flown to India on Monday following a Kaduna court order last week.

He had requested to be allowed to travel to India for advanced medical treatment following the deterioration of his health and that of his wife, Zeenat, in detention.

Both of them have been detained since December 2015 after a clampdown by soldiers who killed at least 347 IMN members.

In the audio, Mr El-Zakzaky accused the Nigerian government of frustrating his medical treatment in India.

Speaking in Hausa, he said the situation at the hospital in India is “pathetic and worrisome situation.”

He said the management of Medanta Hospital, New Delhi, had been threatened not to admit him for treatment.

“The hospital officials received us well they told us that they parked two ambulance vehicles, deceiving the crowd while taking us out through another way, saying that it was for our own safety.

“On getting to the hospital, we are placed under a tighter security situation worse than what we have been witnessed in Nigeria. We are currently more confined than when we were in Nigeria, worse than prison setting.

“Contrary to what was agreed before our arrival, that our own personal doctors would supervise this treatment. Now they’ve changed the arrangement. So, we objected receiving treatment from strange doctors without the supervision of our own trusted physicians,’’ he noted.

In the audio, the IMN leader said he wants to return to Nigeria to source for a reliable and trusted hospital among those countries that offer help.

“There are some other countries that volunteered to help which include Malaysia, Turkey,’’ he said.

His position tallies with that of his followers who on Tuesday accused the Nigerian government and American secret service of frustrating the medical treatment of their leader at Medanta Hospital, New Delhi, India.

Secretary of Academic Forum of the movement, Abdullahi Musa claimed that the security agents, who accompanied El-Zakzaky and his wife, Zeenat, have connived with foreign security agents and threatened the management of the hospital not to admit him for treatment.

He said that the agents believed to be working with US Embassy in India have perfected plans to frustrate the medical treatment.

“Earlier, even before the Sheikh arrived at the hospital, we gathered from competent source that officials of US Embassy in India instructed management of the hospital not to admit him there for treatment.”

The sect called on international community and people of conscience to prevail on the Nigerian Government and its “western masters” to stop playing with the life of their leader and allow him access to the treatment.