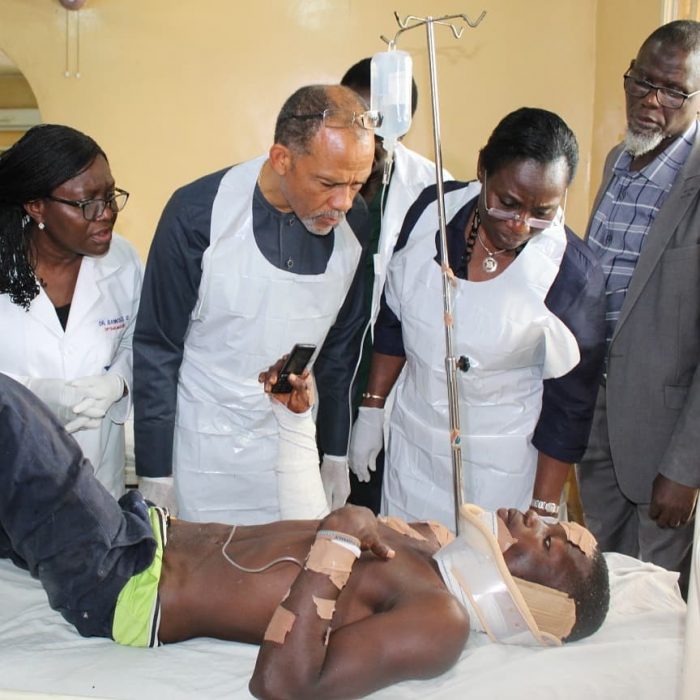 Prof Akin Abayomi at the General Hospital, Ikorodu to visit victims of the accident

Lagos State Government has promised to take full responsibility of the medical bills of victims of the motor accident involving a Dangote truck and a passenger (BRT) bus which occurred at the early hours of today at Asolo along Lagos Ikorodu Road.

A Dangote truck had rammed into a BRT on Tuesday, killing three people with many others injured.

State Commissioner for Health, Prof Akin Abayomi who visited the victims of the accident at the General Hospital, Ikorodu expressed deep sympathy to the victims and assured them of quality and adequate care at the facility.

Abayomi explained that out of the 53 accident victims that were brought to the hospital, one of the victims was brought in dead while two others died in the hospital due to the severity of injuries sustained.

The Commissioner commended the swift action of the Lagos state Emergency Management Agency (LASEMA), LASAMBUS, LASTMA and other first responders in the prompt rescue of the accident victims.

Abayomi assured that that the state government would do everything possible to ensure that the victims were discharged soonest.

While speaking with family members of the victims, Abayomi said that the government remained committed in ensuring that Lagosian got the best health care services and would leave nothing to chance in ensuring best practices in health care delivery across the State.

“On behalf of the Governor of Lagos State, Mr Babajide Sanwo-Olu who is currently out of the country, I express my sympathy to the victims of this unfortunate incidence and I assured you that the government has taken full responsibility to ensure that all victims get adequate health care free of charge and I asure you that the government will not relent in ensuring that lagosians get quality health care. I also use this opportunity to condone with the family members of the diseased,” he said.