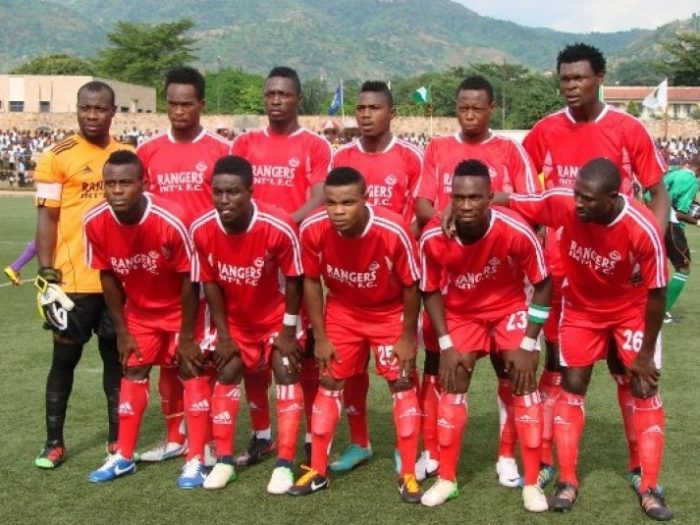 Rangers International Football Club of Enugu have sealed a place in the pre-group stage playoffs of this year’s CAF Confederation Cup competition.

This was after they thrashed AS Pelicans of Gabon 3-1 in the return leg match of the second preliminary round on Sunday at the Nnamdi Azikiwe Stadium in Enugu.

The Flying Antelopes went through 4-3 on aggregate, having lost 1-2 in the first leg about two weeks earlier.

The hosts came out fighting immediately after the kick-off and fired a warning shot to the Gabonese side after two minutes.

This was when defender Semiu Liadi directed his headed effort into the side netting from a Chidera Eze free-kick at the edge of the Pelicans penalty box.

But three minutes later, Liadi went into the referee’s book when he tripped goal-bound Cruz Ndong Enteghe on the edge of Rangers penalty box.

Dertin Amores wasted no effort and planted a left foot kick into the top corner to give Pelicans a shock lead in the fifth minute.

Having gone behind so early in the game, the Flying Antelopes poured out in numbers, piling series of attacks into their opponents’ vital area in search of goals.

The chances came in trickles but poor decisions in the final third cost them time and again.

Their efforts were, however, rewarded in the 19th minute when Ifeanyi George took advantage of a moment of indecision between Pelicans’ defenders and the goalkeeper to head in the equaliser.

Rangers grew in confidence, dominant in their play and had an appeal for a penalty kick waved away by the referee when Tope Olusesi went to the ground inside the box under a slight challenge.

But the ball came back gloriously to George who fired inches over the crossbar when he should have scored.

Both sides went into the half-time break on equal terms with the visitors holding a 3-2 aggregate advantage.

Rangers came back in the second period more dominant as highlighted by two quick goals.

Nnamdi Egbujuo headed in from a corner kick five minutes after the restart to give the hosts a 2-1 lead and 3-3 on aggregate.

Five minutes later, Oluwatoyin Olawoyin made it 3-1 on the night and 4-3 on aggregate for Rangers when he scrambled in the ball during a goalmouth tussle.

Coach Benedict Ugwu refreshed his team’s attack early in the second half, leading to the rush of goals, with the introduction of Chinonso Ezekwe for Chidera Eze.

He later substituted veteran Bartholomew Ibenegbu for Kenechukwu Agu as the home side pressed for more goals.

With 12 minutes left on the clock, Pelicans forward Odile Ombio forced a fantastic save from Rangers goalkeeper Japhet Opubo, following a cross from the right flank.

With the 3-1 advantage on the night, Rangers resorted to game management and defended in numbers to contain the now adventurous Pelicans strikers to run away victors at the end of a pulsating encounter.