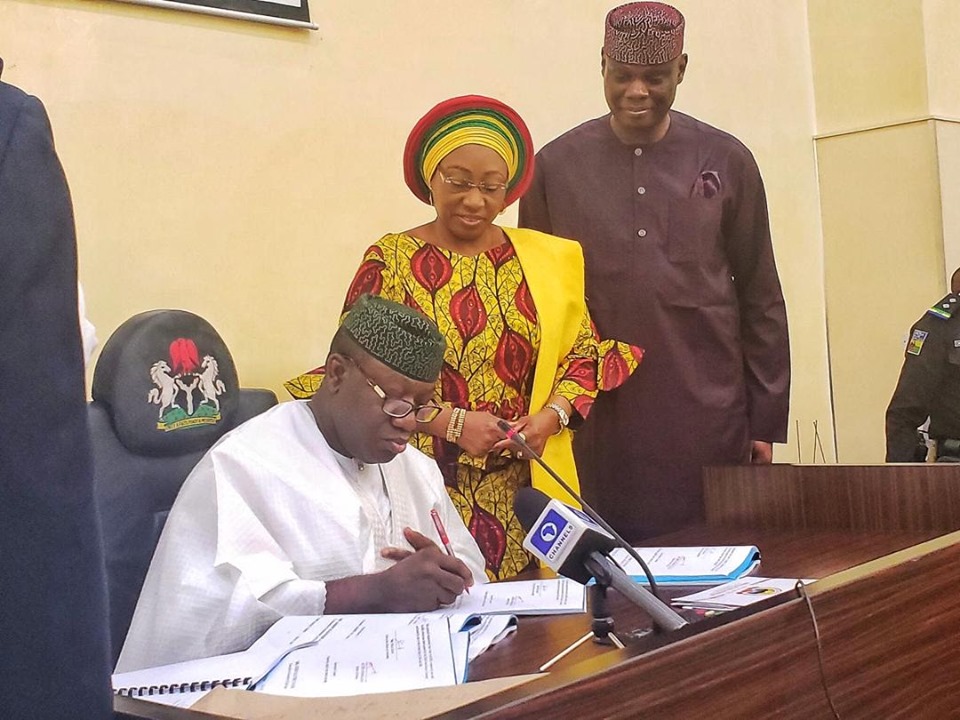 Speaking after signing the six bills into law in his office, the governor observed that it was a collective responsibility of all Ekiti people to contribute towards building a virile state that would be the pride of
all.

The governor said that community naming and shaming to the sexual violence offenders register and incorporating stiffer penalties for convicted offenders were particularly added to the re-enacted law.

Other bills are College of Education, Ikere-Ekiti Law 2019 and Ekiti State College of Health Sciences and Technology Law 2019.

On Ekiti State Gender-Based Violence (Prohibition) law 2019, Fayemi said that the re-enacted Gender-based prohibition legislation improved on the earlier 2013 law in light of the inadequacy of the earlier law.

One of the bills, which has now become law is the Ekiti State Transition Law 2019. to prevent succeeding governments from abandoning projects initiated by past administrations.

The Ekiti State Transition Law, which is the first in the country, will check wanton abandonment of projects simply because they were not initiated by the incumbent.

According to the governor, the bill was hinged on “the difficulty experienced by our incoming administration in the event of power transfer, which is often better left imagined.

” That is what informed the decision to set in specific terms, expectation of incoming and outgoing government during transition,” he said.

On the Ekiti state Fiscal Responsibility Law 2019, he said that the law represents a key finance instrument in regulating the behavior of government with regards to public finance management, fiscal responsibility and transparency.

Fayemi said, “I have no doubt in my mind that the new set of legislations that I have just signed will also enhance our restoration agenda and make meaningful impact in the life of our people.”

Fayemi stated that with the cooperation of all arms of government, a stronger state aimed at enhancing the values restoration agenda of his government and making life more meaningful to the people
would be built.

He added that since his government was building from the rubbles of the immediate past, he was counting on their support to actualize that collective dream of repositioning the state for greater heights.

The governor said the set of legislation being signed into law would enhance good governance.

He commended the state legislature for living up to their constitutional responsibility of legislation, representation, appropriation and oversight.

According to him, the three arms of government as we all know are to complement one another for good governance, peace and harmony.

” I am glad that our lawmakers are living up to their constitutional responsibility, legislation, representation, appropriation and oversight.

”These they must continue to carry out with the larger interest of Ekiti people at the back of their minds.

“The effectiveness and efficiency of our lawmakers excite me, what they have done within four months in office can only be made possible where there is peace and harmony among the rank and file of the assembly.

“This has further shown their readiness, dedication and commitment to serve Ekiti people,” he said.

Fayemi thanked members of the State House of Assembly for being great partners in his administration’s efforts to reposition the state, saying ”they have done a lot to impact on the people towards achieving a stronger Ekiti of our dreams.”

Earlier, Speaker of the Assembly, Mr Funminiyi Afuye, who was accompanied by his deputy and other principal officers of the legislature, commended Gov Fayemi’s administration for working for the best interest of the people of the state.

Afuye said the bills signed into law by the governor would impact positively on the lives of the people, adding that Fayemi had kept faith with his electioneering promises to reclaim the land of Ekiti and restore its values.