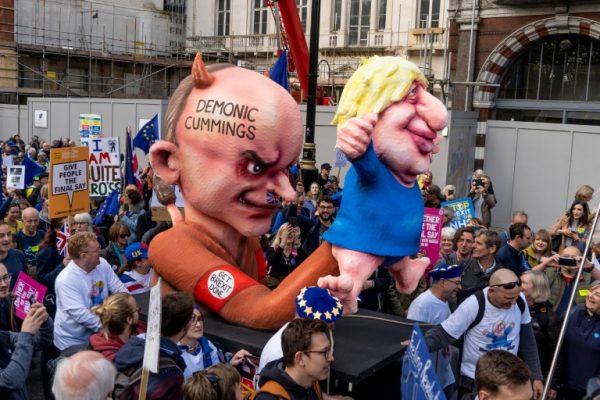 Tens of thousands of pro-EU protesters from across Britain wielding banners, placards and flags converged on parliament Saturday, erupting in cheers as MPs forced the government to ask Brussels for another Brexit delay.

A smaller counter-protest by Brexit supporters draped in the British flag was also staged in Westminster, with rival demonstrators verbally sparring with each other in the shadow in parliament.

Pro-EU demonstrators rallied near Hyde Park in central London before marching to parliament to call for a second Brexit referendum, in the hope of overturning Britain’s planned departure from the European Union.

Walking behind a pink banner proclaiming “together for the final say”, they chanted: “What do we want? People’s vote! When do we want it? Now.”

“The first referendum was jumping on a train without a destination,” said Douglas Hill, 35, from Oxford, south central England, with his Estonian wife and their baby daughter.

“Now that we have a destination, we need to have a second referendum.”

Another attendee, Theodor Howe, a 20-year-old student in Dundee, eastern Scotland, conceded another poll could be divisive but insisted it was still necessary.

“People should have a say in what is going to happen,” he said..

The mood was buoyant when news came through that MPs had voted to delay their decision on whether to accept the deal, although the prime minister vowed again he will not negotiate an extension beyond October 31.

The crowd broke into cheers and applause, with demonstrator Philip Dobson telling AFP: “That’s really good, that’s one step away from Brexit.

“It could be that the government falls, who knows?”

Thomas Lambert, a rare Brexit supporter wandering among the crowds, said he was “gutted” by the vote, adding: “Another delay is an abomination.”

Politicians including John McDonnell, the main opposition Labour Party’s finance spokesman, and London Mayor Sadiq Khan, were due to address the crowds.

Organisers from the People’s Vote pressure group laid on 172 buses to bring demonstrators to the British capital, with the cost covered by supporters from sport, business and entertainment, it said.

Former prime ministers John Major, a Conservative, and Tony Blair, of Labour, feature in a film set to be broadcast to the crowds in Parliament Square.

“Whatever is the outcome, no deal or bad deal, it should not pass without the final say resting with the people,” they said in a statement Friday.

Khan was among those leading the crowd as it snaked its way towards parliament, which was holding its first Saturday sitting since the 1982 Falklands War as the British prime minister tried to win MPs’ backing.

The protesters unveiled an effigy depicting Johnson as a puppet operated by his chief advisor Dominic Cummings — a highly divisive figure who masterminded the successful 2016 campaign to leave the EU.

“It will be our last opportunity to have a final say,” said Jane Golding, a lawyer working in Berlin.

“Most British abroad didn’t have a say in the last referendum, most Europeans here didn’t have it either. That wrong needs to be righted. Let us vote!”