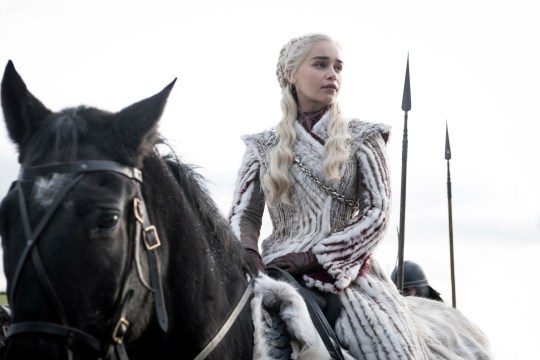 The actress, who played Daenerys Targaryen in the HBO fantasy series, has spoken about the backlash faced by DB Weiss and David Benioff after fans revolted. Seemed after eight seasons you still can’t please them all, but the fans still expected an 11/10 ending across the board. To Emilia, that was never going to be the case.

Speaking about how the power of hindsight may have adjusted her feelings towards the arguably harsh reaction from fans, Emilia told The Daily Telegraph’s Stellar magazine: ‘I was too busy focusing on my own reactions to really pay too much attention, if any at all.

‘The only thing I felt truthfully sad about was that executive producers David Benioff and Dan Weiss are my really good friends, and so it’s for them that I feel heartbreak, because it’s theirs.’ The star is no stranger to the opinion of the fan, admitting the viewers are entitled to their own thoughts on art. ‘Everyone is going to have their own opinion and they’re fully entitled to them. It’s art and it’s to be dissected and taken on in whatever individual way you wish,’ she continued. ‘And if you’re sad that the show is done and you’re sad because you enjoyed watching it, then that’s sad. ‘It sucks this wasn’t the perfect ending that people were hoping for, but I truly believe we would never have made everyone happy.’ Recently the show’s director Neil Marshall says he would have done things a lot differently for the final two episodes of the concluding season.

If anyone was to know anything about gruesome fights and barbaric wars, it would be Neil, who directed the pivotal episodes Blackwater and The Watchers on the Wall which had Jon Snow’s (Kit Harington) first lover Ygritte (Rose Leslie) killed. However, it doesn’t change the fact that Benioff and Weiss know the show inside and out and had control since the series began. ‘It’s very difficult to second guess those guys because they are geniuses and they have done such an amazing job,’ the Hellboy creator exclusively told Metro.co.uk. ‘Inevitably, I would’ve taken a different approach to directing. One of the greatest experiences I had with working on both those episodes was that they were so open to bringing my ideas, particularly about battle scenes and how battles worked. ‘I would’ve definitely added my strategy and knowledge to that.’ It comes as chapter after chapter of the show as we know it closes in anticipation of the prequel – including the cast WhatsApp group chat.