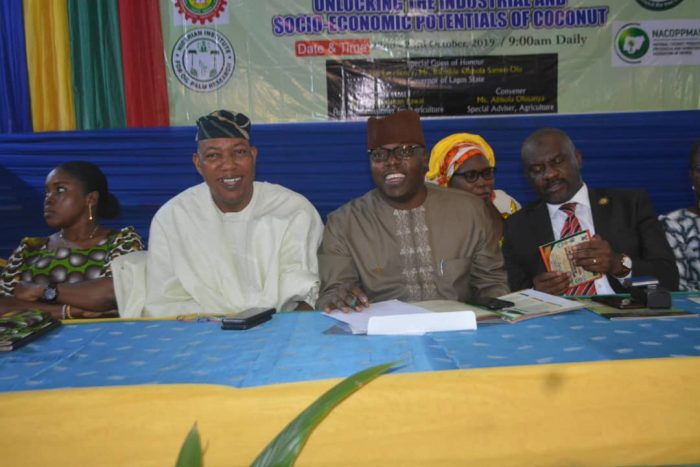 Commissioner for Agriculture, Prince Gbolahan Lawal (2nd right) nd others at the event

Lagos State Governor, Babajide Sanwo-Olu on Tuesday disclosed that the State has about two million coconut trees with an annual production of 200 million husked nuts worth about N10 billion.

The governor spoke at the maiden edition of the International Coconut Summit held at the Airport Hotel, Ikeja, Lagos, Southwest Nigeria.

Sanwo-Olu, who was represented by the Commissioner for Agriculture, Prince Gbolahan Lawal, also said the state had potential of more than 10 million coconut trees with an annual production of one billion husked nuts worth about N50 billion, adding that as at present, Lagos State is the hub of Coconut Value Chain, not only in Nigeria but the entire West Coast of Africa.

“Coconut Value Chain contributes significantly to the economy of the country considering the fact that it is being grown in commercial quantity in more than 22 States of the Federation. Lagos State is paying special attention to this crop being the largest producer accounting for 70% of the national production. As at 2016, Nigeria produced 283,774Mt of Coconut and this increased to 288,615Mt in 2018. With the concerted efforts of Lagos State Government and other stakeholders in the Coconut Value Chain, the yield is expected to increase to more than 400,000Mt within the next 3 years,” the governor said.

Sanwo-Olu pointed out that with Oil prices averaging $63pb this year thereby leading to uncertainty in the nation’s revenue, there was a compelling need for economic diversification, greater emphasis on agriculture in general and Coconut Value Chain in particular in Lagos State.

“Coconut is one of the greatest gifts of nature to man because it exhibits a wide range of products, perhaps the most useful tree in the world. It grows naturally along coastal terrain and cultivated in about 92 countries of the world such as India, Indonesia, Philippines, Sri-Lanka and Nigeria among others. Lagos State is naturally blessed with a vast Coconut Belt made up of 180 km2 (18,000Ha) Coastal line and about 703.19 Km2 (70.319Ha) on the Islands,” he averred.

The Governor listed some of the long term efforts the government was embarking upon to ensure sustainable coconut production and processing as including aggressive coconut rehabilitation program (replanting), production of improved planting materials, youth empowerment schemes through the provision of small scale coconut processing equipment and a private sector-driven expansion program on coconut plantations and seed gardens.

He explained that the Summit served as another timely wake up call to go back to the land and rekindle the interest and values of coconut and its myriads of products in Lagos State and the country in general as being practiced by some coconut driven economies particularly given the past experience, especially with regards to the neglect suffered by Agriculture as a result of the discovery of oil.

Sanwo-Olu noted that over the years, the State Government had been involved in the rehabilitation of the coconut belt, massive production of improved coconut seedlings, capacity building and empowerment of coconut value chain actors, production of coconut derivatives on demonstration basis, encouragement of proliferation of coconut cottage industries for value addition and technological advancement in the coconut value chain in a bid to encourage private investors.

He, however, assured that the government would implement the recommendations of the Stakeholders with particular reference to supporting the massive production of improved coconut seedlings; increase rehabilitation of coconut grooves and coastline; training and building the capacity of 1000 youths on coconut products development; coconut oil processing and conversion of coconut wastes to wealth.