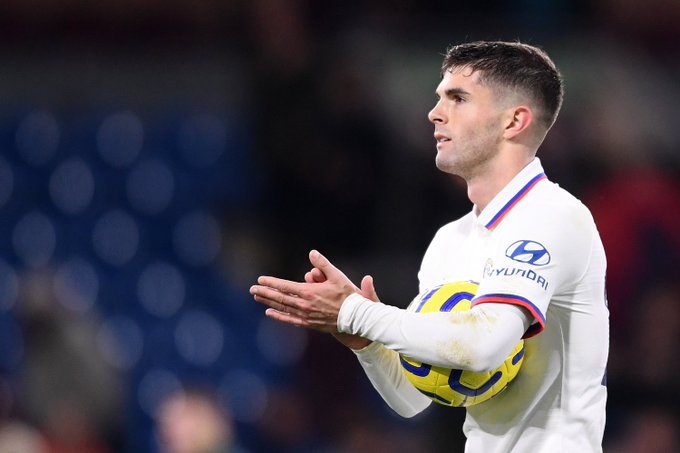 Christian Pulisic hit the first hat-trick of his career as Chelsea crushed Burnley 4-2 on Saturday while Manchester City overcame a sluggish start to beat Aston Villa and increase the pressure on Liverpool.

In the early kick-off, a frustrated Pep Guardiola watched his side recover from a tepid first half to defeat Villa 3-0 and close the gap on Premier League leaders Liverpool to three points.

US international Pulisic scored his first goals for Frank Lampard’s Chelsea, who have now won four straight Premier League games, while Marco Silva is under pressure after another Everton defeat.

Pulisic, who had not previously scored for Chelsea and has struggled to win a starting berth, emphatically staked his claim with a hat-trick at Turf Moor.

The 21-year-old capitalised on some indecision from Burnley to drive into the penalty area and steer a low left-footed shot into the corner of Nick Pope’s net midway through the first period.

The former Borussia Dortmund winger doubled his tally for the Blues with a second goal just before half-time, benefiting from a big deflection off Ben Mee, and grabbed his third with a second-half header.

Willian added a fourth for rampant Chelsea in the 58th minute to take the score to 4-0 and despite late goals for Jay Rodriguez and Dwight McNeil, the visitors avoided further shocks to win 4-2.

Earlier, City boss Guardiola was frustrated with the way his players struggled to establish any momentum in the first half against Villa despite an ultimately comfortable win at the Etihad Stadium.

“Of course, respect and credit for Aston Villa. The first half we played football but we don’t play in the way we should play,” Guardiola said, after second-half goals from Raheem Sterling, David Silva and Ilkay Gundogan.

“We were better in the second half. I don’t know if it was because of the early goal.

“In the second we play in the way we normally do but we have to try and play 90 minutes. We played just 45.”

Tarnished Silva
At the Amex Stadium, Everton blew a 2-1 lead over Brighton in the final 10 minutes to leave boss Silva fighting to save his job.

Silva’s side recovered from conceding the first goal to lead but Brighton’s Neal Maupay scored an 80th-minute penalty after Michael Keane was controversially ruled by VAR to have fouled Aaron Connolly.

And Everton defender Lucas Digne added to Silva’s woes when his stoppage-time own goal from Leandro Trossard’s cross left Everton two points above the relegation zone after their fifth defeat in their past six league games.

“We have to be more mature to control the last 10 minutes,” Silva told the BBC. “It’s a tough moment for us. We have to stick together.”

Watford remain bottom of the table after a 0-0 draw against Bournemouth.

Lys Mousset, who scored the winner against Arsenal last week, finished a memorable week on a high note with the equaliser in Sheffield United’s 1-1 draw at West Ham.

Leicester boss Brendan Rodgers believes there is even better to come from Leicester after they equalled the biggest margin of victory in the Premier League era.

Leicester are third after hat-tricks from Ayoze Perez and Jamie Vardy secured the biggest away win in English top-flight history.

“I think we’ll get better, we will improve. Of course the result and performance is perfect,” Rodgers said.

“We have young players who are only going to gain even more confidence. We will get better. We certainly won’t just be content with what we’re doing.”

Aside from the Liverpool-Spurs clash on Sunday, Newcastle host Wolves, Arsenal take on Crystal Palace at home and Manchester United travel to Norwich.