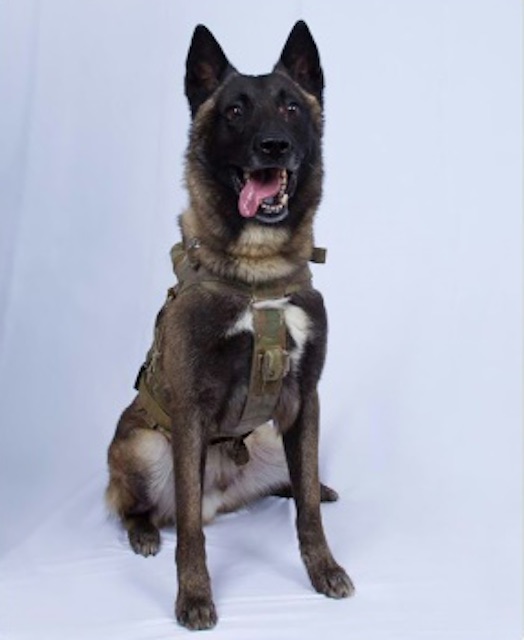 US President Donald Trump basking in the glory of killing Islamic State leader Abu Bakr al-Baghdadi took to Twitter on Monday to reveal the picture of the dog that chased the wanted man into the dead-end tunnel, where he detonated his suicide vest, killing himself and three children.

Trump did not however name the military dog or the breed. It was wounded in the blast but was recovering, military sources said.

He tweeted: “We have declassified a picture of the wonderful dog (name not declassified) that did such a GREAT JOB in capturing and killing the Leader of ISIS, Abu Bakr al-Baghdadi!”

The AFP suggested that the unnamed dog could be a Belgian Malinois, a breed favoured by the US military, which chased Baghdadi into a tunnel under the complex and cornered him before he detonated his suicide vest.

Trump praised the dog on Sunday as “beautiful,” but military officials said any information about it, including its name, was secret.

The dog had been “slightly wounded and is fully recovering,” he said.

To make the dog track Baghdadi, a CIA agent who infiltrated Baghdadi’s abode stole his underwear for DNA test to “make sure (100%) that the person in question was al-Baghdadi himself,” a military source told AFP.

“Since 15 May, we have been working together with the CIA to track al-Baghdadi and monitor him closely,” said Polat Can, a senior adviser to the Kurdish-led Syrian Democratic Forces.

“Al-Baghdadi changed his places of residence very often,” he said on Twitter.

“Our intelligence source was involved in sending co-ordinates, directing the airdrop, participating in and making the operation a success until the last minute,” Polat Can said.

The source also “brought al-Baghdadi’s underwear to conduct a DNA test and make sure (100%) that the person in question was al-Baghdadi himself,” he said.