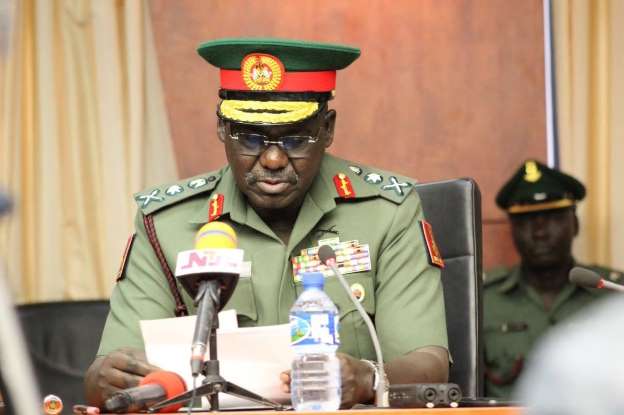 The Chief of Army Staff, Lt.-Gen. Tukur Buratai has urged the media to stop giving prominence to the activities of insurgents in their news publications.

Buratai made the call when he received the management team of the Sun Publishing Ltd, led by its Managing Director/Editor-in-Chief, Mr Onuoha Ukeh, on Thursday in Abuja.

Buratai, however, called for collective action led by the media towards addressing the menace of insurgency in the country.

He explained that there was a need for de-indoctrination of the sect through spiritual warfare to discourage the terrorist ideologies.

According to him, the media can help insurgency to end through collective action with the military.

“Be rest assured that we welcome you to not only report or project the Nigerian army positively and by extension the armed forces but we also welcome constructive criticisms.

“We believe that by such positive criticisms, we can improve on our services, operations and general administration.

“There is need to also clear the doubt of some in respect of our capabilities to maintain our territorial integrity and also to provide the needed support to the civil authority to have a peaceful country,” he said.

Earlier, the Managing Director, Uke, commanded the Nigerian army and the military in general for their effort towards keeping the country safe.

He said that the visit was to extend a hand of fellowship to the army authorities to collaborate in the fight against insurgency and other forms of insecurity in the country.

He pledged that the newspaper would continue to give the military the necessary support in its effort to keep Nigeria safe.