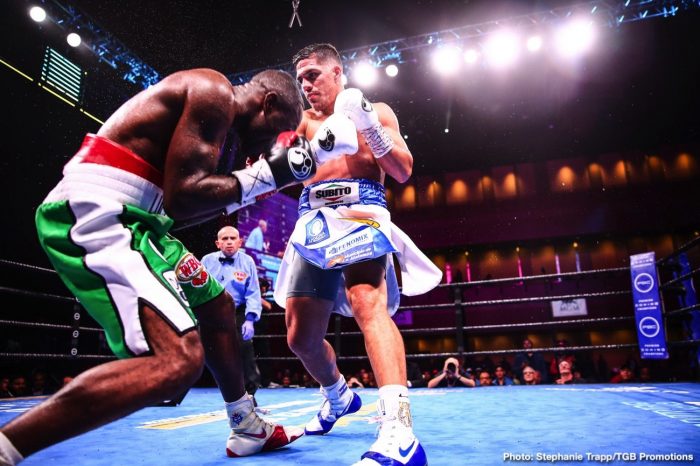 The official time of the stoppage came at the 3:00 mark of round five, reports East Side Boxing.

“I came in very ready for this fight,” said Castaño. “I had to be a little patient with Omotoso, but I waited to hurt him and it all paid off.

“I’m ready to be a champion again,” Castaño continued. “I’m prepared for any of the champions in my division. There are lots of great fighters in this weight class, but I truly believe that I can beat any of them.”

The co-main event featured former world champions Javier “El Abejón” Fortuna (35-2-1, 24 KOs) from the Dominican Republic knocking out Argentina’s Jesús Andrés Cuellar (29-4, 22 KOs) at the 2:01 mark of the second round in their super featherweight showdown. Fortuna knocked down Cuellar in both the first and second stanzas. Shortly following the second knockdown, the referee had seen enough, calling a stop to the action.

“I expected a tough fight,” said Fortuna. “I wanted to be very active in this fight and win it for the Republic!

“This being a WBC eliminator bout, we expect a shot at (Devin) Haney next,” concluded Fortuna.

Sensational Cuban prospect David Morrell Jr. (2-0, 2 KOs) scored a quick knockdown against North Carolina’s Quinton Rankin (15-7-2, 12 KOs) in the first frame, another knockdown in the second round, with the contest being waved off at the 1:01 mark of round two in their light heavyweight contest.

“I never really go into a fight planning for the knockout,” said Morrell. “However, I’m a seek and destroy type of guy. So, if I see the opportunity I’m going to try to take the guy’s head off, but I don’t plan for that.

“I had a great amateur career that helped prepare me for these opportunities early in my professional career,” continued Morrell. “Just like with (Vasiliy) Lomachenko, I’m ready for a world title shot right away, and if we can get that in our next fight I’ll gladly take it.”